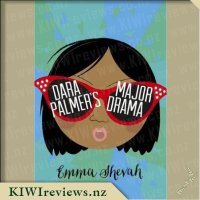 Dara Palmer's Major Drama has an intriguing cover as well as title. I was eager to start reading! Although this book is aimed at 8-12 year old girls I think this could stretch to suit up to around 15 year old girls too! Behind the drama this story is Dara's version of growing up and into a young lady.

The story reminds me very much of my own 11 year old sister, dramatic, adventurous and care free. The language used is very much aimed at young readers, plenty of slang as well as fun expressions! Dara strives to be the centre of attention ... always. Dara gets herself into some tricky situations but is a keen problem solver and things seem to work out for her. Nothing stops Dara Palmer.

Part of Dara's journey is discovering why she doesn't get the lead role in her school play. Learning she is not as good as she thought she was is a huge realisation and something I can relate too! This is a part of her growing up and maturing. I also think it is a great message for young girls as Dara realised she was not good at the thing she thought she excelled at but did not let that stop her, she did not give up and that is a fantastic message!

I was intrigued by the title of Emma Shevah's novel, "Dara Palmer's Major Drama", and could not wait to start it. I found it compelling reading and could not put it down as I quickly became caught up in Emma's adventures and unique view of the world.

Although this is a book aimed at 8-12 year old girls, I think that younger teenagers too would enjoy reading about Emma's journey. In many ways it is a coming-of-age story which shows how Emma learns to accept herself and her place in society while still holding on to the things that are most precious to her.

What makes "Dara Palmer's Major Drama" so much fun is the way that the author has constructed it in the first person with Emma narrating her own journey. The language is very accessible to younger readers as Emma's words are presented as a young person might speak - pithy and with a generous sprinkling of slang and trans-Atlantic expressions gleaned from the movies. Emma's pet expression is "A teaspoonful of..." which covers all eventualities depending on which word follows! (At one stage Emma does admit that she has always been crazy about teaspoons, but she has no idea why that should be!)

Central to the story is Emma's irrepressible outlook on life. She is a self-confessed extrovert, always wanting to be the centre of attention. Emma and her friends rely heavily on the fantasy world of media stars and their perception of how they live and what their values might be. Emma's great love, in fact, is a movie star called Bradley Porter, a man who almost certainly is not aware of her existence!

There is one major turning point in the book - when Emma finally starts to think seriously about who she is and where her life is going. After itemising the many problems she is working through, she sums it up by stating that "Some thoughts are so big and heavy you need an adult mind to think them". This is the start of the new Emma, the little girl who is about to become a teenager and take responsibility for her own future.

Emma's progression - through accepting her being adopted into an English family whose ethnicity differs from her own, to admitting that she may have natural talent as an actress but still has a lot to learn, to realising that it is time she started getting on with her little sister - is a joy to experience along with her. The reader becomes part of Emma's world, sharing her disappointments and triumphs, and ultimately breathing a sigh of relief as things come right for her in the end!

The book that reinvented Space Opera

It is the 29th century and the universe of the Human Hegemony is under threat. Invasion by the warlike Ousters looms, and the mysterious schemes of the secessionist AI TechnoCore bring chaos ever closer.

On the eve of disaster, with the entire galaxy at war, seven pilgrims set forth on a final voyage to the legendary Time Tombs on Hyperion, home to the Shrike, a lethal ... more...