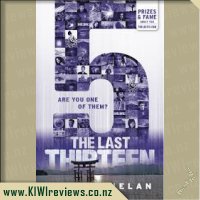 Sam heads to Japan with Tobias to meet the next Dreamer, a famous professional gamer. While at a tournament in Tokyo, Stella arrives, forcing Sam and Dreamer number nine to take extreme evasive action. As ever, Solaris is on the scene in a flash...

Meanwhile, Alex and Shiva are captive in Shiva's New York apartment after being fitted with wrist bombs that will detonate if they attempt to escape, and Eva learns how participating in the Four Corners competition will help discover Solaris's location, and where he is keeping the Gears he has stolen from them.

We are now WAY past the midpoint of this series, and things are getting very exciting. This book was rather interesting to me, particularly because it has two major tournaments which go on inside the story which sound pretty darn awesome. The first is the Dreamer Doors competition, a game which uses a True Dreamer's ability to control their dreams, and turns it into a game, a game which the Academy - a sort of "Xavier's School for Gifted Youngsters" for True Dreamers - are using to try and locate the gears of Leonardo Da Vinci's Bakhu machine which were lost to the enemy factions of Solaris and the rogue Enterprise agent Stella.

The second is where the next dreamer of the last 13 is found, a gamer tournament of epic proportions. Now, I have always been excited about gaming, so this tournament held great interest for me, but unfortunately it doesn't all go to plan, but that just kept me on the edge of my seat. The further this series goes, the more and more the physical laws which exist in this story defy and bend the laws of our own reality, but I love how the author has tried to help the reader understand these physical phenomenon, as it helps to preserve the reader's sense of being a part of the story.

The location of the next gear was an interesting choice, as Japan is one of the second most interesting places I have read about, it has a culture and language stunningly similar to that of China, it was were the first atomic bomb was dropped, and it has managed to combine modern technology with ancient culture; not to mention they export their fair share of mass-produced goods and have thus become recognized as a manufacturing capitol. The story went well, I was able to follow along with the character's quest to find the Dream Gate as well as being impeded by the ever-mysterious Solaris at several points along the way.

I am also noticing that Sam is now having far less trouble trying to convince the last 13 about the existence of the quest, as this dreamer was already informed about the whole gig, so now things are getting less uniform, and I just love it when the author mixes things up! I would also like to re-iterate my high interest in the author's technique of breaking up the storylines of several different characters, leaving each segment ending with a cliffhanger, and then stitching them together to help lure the reader through the book, like following an ever-present carrot on a stick.

The price of the book is, as usual, right in the Goldilocks zone, as it fits the book's value and also takes good account of the necessary profit for the manufacturers and the distributors (i.e, the bookstores), so I give it a 10/10. After the series has blown over, I would be interested in reading through the whole series again, just to help get the whole series through my head as a continuum, as the series has been interrupted by several other books which I have taken on board, so yes, I would very much love to read this book again sometime. Overall, I am very impressed with this series, it has captured my attention for almost a whole year now, which can't be said for some other series I have read in the past. Enjoy!

I still have not been able to give a single book in this series any less that a complete 10 score I just love the books and have not lost any interest in the series. It had been a while since I read the last book but the great thing about these books is they give you a brief recap of the last story before starting the new edition so my memory was soon refreshed before plunging into the next action packed edition.

This book was extremely fast paced and there was no shortage of action throughout with all the main characters finding themselves in trouble one way or another. It seems the race is really heating up and no one is safe as Solaris, Stella, Hans, Matrix and others are all on the hunt for the gears, Sam and the others of the last thirteen. I still am not sure who to trust and I really want to find out the true identity of Solaris. I have suspicions that not even the Professor himself can be trusted but I could be proved wrong.

Well in this book the race certainly got a lot more dangerous and Sam the hero and the latest of the last thirteen dreamers find themselves in very real danger against Solaris and Stella and some very fierce dogs. The book ends with us not knowing if Sam is alive and dead as he is once again surrounded by Solaris's flames and in the water. The good thing is I have the next book sitting here already to get stuck in so it won't be long before I find out how he gets himself out of this pickle.

Am also looking forward to seeing how the dreamers doors competitions goes and if they manage to get any of the 4 gears stolen from them by Solaris back, so they can get back into the race. With only 4 books to go i'm starting to get nervous when every gear they find seeming to be stolen from them. Lets hope they get the gears back and get to the dreamer gate in time. Things are already starting to get chaotic with all the nightmares taking place in the dreamscape at the moment.

Sunday Jones believes in hope, and that you will always find it somewhere.

The Great Orlando believes in the magic of the dove...