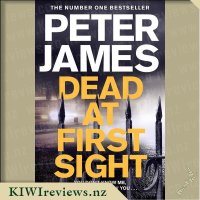 Disclosure StatementFULL DISCLOSURE: A number of units of this product have, at some time, been supplied to KIWIreviews by Macmillan Publishers Ltd or their agents for the purposes of unbiased, independent reviews. No fee was accepted by KIWIreviews or the reviewers themselves - these are genuine, unpaid consumer reviews.
Available:
in stores 16 May 2019

A man waits at a London airport for Ingrid Ostermann, the love of his life, to arrive. Across the Atlantic, a retired NYPD cop waits in a bar in Florida's Key West for his first date with the lady who is, without question, his soulmate. The two men are about to discover they've been scammed out of almost every penny they have in the world - and that neither women exist.

Meanwhile, a wealthy divorcee plunges, in suspicious circumstances, from an apartment block in Munich. In the same week, Detective Superintendent Roy Grace is called to investigate the suicide of a woman in Brighton, that is clearly not what it seems. As his investigations continue, a handsome Brighton motivational speaker comes forward. He's discovered his identity is being used to scam eleven different women, online. The first he knew of it was a phone call from one of them, out of the blue, saying, 'You don't know me, but I thought I knew you'.

That woman is now dead.

Roy Grace realizes he is looking at the tip of an iceberg. A global empire built on clever, cruel internet scams and the murder of anyone who threatens to expose them.

Dead At First Sight is the 15th book in the 'Detective Superintendent Roy Grace' series. For those already ingratiated in the series, they will have no need for a review, and have likely pre-ordered the book already. For those that aren't aware of the series, and are simply intrigued by the synopsis...this review is for you.

I have had no exposure to the series before I opened this book, and was quite surprised to see how many books have preceded it. To be honest it did seem a little bit daunting to think that there are that many other prior books with development and history of characters that I would likely be coming across in this story. That being said, the quality of an author is shown in their ability to include the necessary information to allow each book to work as a standalone. If this synopsis appeals to someone, you don't want to have read every single book before it to be able to understand what is going on (but the goal would, of course, be to engage the reader enough that they would want to read the rest)

What is interesting with this book (and assumedly the whole series) is the structure. The 427-page story is split into 130 very short chapters; some may be up to seven pages long, but most are much shorter, with the shortest being around half a page in length. This sort of structure has its upsides and its downsides. On the one hand, shorter chapters make it easier to keep track of where you are up to and provide frequent places you can stop (handy if you are frequently interrupted or only have to time to read in short bursts). On the other hand, each chapter comes with a change in perspective, and this makes the story quite cumbersome for a new reader.

It makes sense that when you have read the prior books, that you already know the history of each recurring character, so switching narratives frequently isn't an issue. If you are not familiar with the characters though, the short chapters are inhibitive and don't give enough time to lock in the storyline and traits before another completely separate character and storyline are introduced in the next chapter. Personally, despite reading the entire book in only 4 sessions, I was well over halfway through before I started getting accustomed to the characters and I could truly start focusing on and enjoying the story.

The story is set up with all relevant characters from the start. Even with characters that have yet to be brought into the main story, we will follow them beforehand. It is an intriguing method of storytelling, that has all of these separate storylines slowly converging as the book progresses until it coalesces into a single event from multiple perspectives. You have to applaud the author's ability to keep track of so many simultaneous storylines.

The Detective Superintendent Roy Grace series exhibits a thorough policing experience. With a plethora of acronyms that require a glossary in the back of the book, it takes its time to explain the different ranks and roles, as well as obligations in the legal system. So thorough, that you even get characters dealing with past storylines that have been solved, but are now being put through the slow and difficult court battle. It's interesting in that it doesn't glorify the justice system. There isn't a single person that is the "hero" that has an answer to everything or can solve everything. It's all a well balanced cooperative effort which is an incredibly grounded point-of-view.

One thing I can definitely say without ruining the plot is that it frequently references prior stories in its efforts to provide the minimum backstory for re-introduced characters, and some of those stories sound super exciting. I'm curious to actually check out some of the other books.

Dead At First Sight is a slow-building thriller that serves as a warning to those looking for love through online dating. Educational on so many levels, the story does a brilliant job at communicating the dangers and costs, as well as the difficulties in catching those that are committing these crimes. The series itself is so unbiased that it can often come across as unemotional cold, but there is a certain humility that readers will find appealing.