« Asterix: The Secret of the Magic Potion review 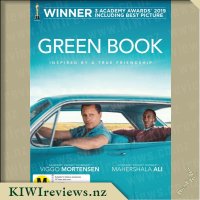 Disclosure StatementFULL DISCLOSURE: A number of units of this product have, at some time, been supplied to KIWIreviews by Universal Pictures NZ or their agents for the purposes of unbiased, independent reviews. No fee was accepted by KIWIreviews or the reviewers themselves - these are genuine, unpaid consumer reviews.
Available:
May 2019

This film was inspired by a true friendship that transcended race, class, and the 1962 Mason-Dixon line. When Tony Lip (Viggo Mortensen), a bouncer from an Italian-American neighbourhood in the Bronx, is hired to drive Dr. Don Shirley (Mahershala Ali), a world-class black pianist, on a concert tour from Manhattan to the Deep South, they must rely on the "Green Book" to guide them to the few establishments that were then safe for African-Americans. Confronted with racism and danger as well as unexpected humanity and humour, they are forced to set aside differences to survive and thrive on the journey of a lifetime.

There are key moments in world history which define the future, whether for good or bad. This movie is set at a time when African Americans were still under the yoke of segregation, when reformers like the Kennedys were just starting to look to a better future for all Americans regardless of race or other differences. There have been many other movies dealing with prejudice and racism, but most of them highlight the political agendas of the time and point the finger at the enemy (usually a Caucasian). This movie takes a different approach. Segregation and injustice are certainly key themes, but this story is equally about two very different people finding common ground and forging what turns out to be a lifelong friendship. Their road trip to and from the deep south, where a black man could be arrested just for speaking out, is a journey of self-discovery and ultimate hope.

This film is fascinating because it is inspired by a true story. Lip (Viggo Mortensen), an uneducated New Yorker of Italian origin, is thrown together with Shirley (Mahershala Ali), a gay academic and concert pianist, on the most unlikely of odysseys. Despite their initial mutual mistrust, they manage to earn each other's respect as together they encounter and overcome various challenges. Once that trust has been established, they accept their personal limitations and are able to learn from each other. Neither is perfect; this makes the film all the more credible. The balance constantly shifts; sometimes it is Lip who is sharing his philosophies with Shirley, and at other times it is Shirley who is teaching Lip.

The three bonus features which are included on the DVD are well worth watching, especially the last (Going Beyond the Green Book) which gives more detail about the publication for which the film was named. The Negro Motorists' Green Book was a travellers' guide for African Americans and included details of motels and other establishments which welcomed black guests. I was simultaneously fascinated by the history behind this publication and repelled by the idea that it was once necessary. The world still has a long way to go in terms of human rights, but there has certainly been a lot of progress since the 1960s when the movie was set.

There were effectively three stars in the movie; apart from Viggo Mortensen and Mahershala Ali, as the two main protagonists, there was the wonderful musical score comprising several obscure popular songs of the period, some original compositions from Kris Bowers, and classical pieces from Shirley's own repertoire. The rolling soundtrack credits at the end of the movie seemed to go on forever - and yet the music never intruded; it was simply there, underscoring the importance of Shirley's career both for him as a musician and for Lip as his employee.

If this movie has a message, it is that dignity and mutual respect are the cornerstones of friendship - whether it be between individuals or within communities. There are several occasions when Shirley offers his thoughts in support of this, but there is also a pivotal scene where he admits to being between two worlds: the black and the white, the gay and the straight, the academic and the minimally educated, the cultured and the vulgar. Shirley's outward signs of being cultured are his extravagant clothing, his throne, and his millionaire lifestyle. Lip has no such trappings; his philosophies are based in working class values, his appearance characterised by a cigarette, a KFC takeout, and a permanent state of financial embarrassment. Yet Lip, too, has a certain dignity insofar as he is secure in his relationship with his wife and children - and indeed, his greater family. This is his personal cornerstone.

I felt the film succeeds on many levels. It follows a fine balance between making the relationship between the two men believable, emphasising that they are evenly matched most of the time. The ending is predictable, lacking the strength of the rest of the movie, but it is not the most important part of the story. The high point is the scene where Shirley finally takes command of his own fate and publicly rejects racism and all it stands for. That is the scene the audience wants to see; everything after that is by way of a postscript. There is also a humorous element which surfaces from time to time, just often enough to elevate the audience's mood and stop the movie from becoming too dark - as well it could have done.