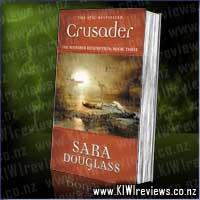 Disclosure StatementFULL DISCLOSURE: A number of units of this product have, at some time, been supplied to KIWIreviews by HarperCollins or their agents for the purposes of unbiased, independent reviews. No fee was accepted by KIWIreviews or the reviewers themselves - these are genuine, unpaid consumer reviews.
Available:
Febuary 2007

For countless millennia the Star Dance and the TimeKeeper Demons have battled their way across the universe, destroying innumerable planets, laying waste to civilizations across the cosmos. Choosing the land of Tencendor as their last battleground, the demons break through the Star Gate. The Gate destroyed, all magic in the world is gone and the three races of Tencendor are plunged into a vortex of chaos, madness, and death.

Caelum SunSoar, son of the near-immortal Starman Axis and beloved ruler of all the land's peoples, is dead. Leaderless, those not killed outright or driven mad flee to the one place left to them, Sanctuary, a magical place created ages past to shield all who are good from the wrath of the demons.

There is for some one hope left: DragonStar, Axis' s other son. Many believe he is the true StarSon, the only being that can save their world. Others are just as convinced that he is in league with the demons and will be their doom. Only DragonStar knows the truth and as he and his companions go forth to do battle he prays that he may convince all that his motives are pure. What he does not know is that there is a traitor who plans to hand Sanctuary over to the Demons. A betrayer whose actions could force DragonStar to make a sacrifice so bloody and horrific that it could mean the destruction of everything that he holds dear in this life or the next. And if he fails, he could doom Tencendor to an eternal hell.

And so closes the story of Tencendor, begun in 'BattleAxe' Trilogy and continuing into the Wayfarer Redemption, Sara Douglass managed to fill six books with an epic, twisting tale that introduced and made me care about many different characters and their intertwining lives, all pummeling toward an inevitable show down and an even more inevitable conclusion - I always knew how this story would end (I had the unfortunate privilage of having read the Darkglass Mountain books before these), but I still enjoyed the journey, for the most part.

This final book, Crusader, did not, unfortunately, break the mould of Douglass' previous works and I still struggled through the first half, wishing the characters wouldn't mope around in despair quite so much. Many of the 'heroes' of the previous stories ultimately proved quite emasculated and almost entirely useless which, while highlighting the depths of the demon's power and evilness, did not help for readability.

Faraday, particularly, who had started out so bold and powerful in Sinner, was quickly reduced to a rather lame and fatalistic damsel in distress - something I cannot quite forgive, given Douglass' normally powerful and admirable female characters. Her portrayal of Faraday in this final book was probably what disappointed me the most.

The Wayfarer Trilogy was certainly a sweeping epic, and a satisfying conclusion for those who wished to know 'what happened next' following the events of the BattleAxe Trilogy, but, on its own, it struggled with the number of characters and points of view it was trying to portray. I liked the characters in a blanket sense, but no one really stood out as particularly impressive, except perhaps Gwyndelyr - a relatively minor witch who is so organized and calm in the face of the demons that I couldn't help laughing whenever she turned up.

In the end, I am left somewhat ambivalent. I would definitely recommend the series to anyone who has read BattleAxe (you will get all the references), and if you like the epic 'save the world' style fantasy, then this has all the elements and is very intelligent. However, I will warn that it takes a certain level of effort to get through and the end result may or may not be quite what you were hoping for.

As Sam is drawn into an age-old battle for the Dreamscape. Even more confusing is that the next Dreamer seems to know as much as Sam about the importance of her dreams and the search for the Gears.

From the Kremlin in Moscow to the wilds of Siberia, Sam is involved in a race-within-the-race with an old adversary with a sinister way of staying one step ahead. The more Sam and his friends dream, the less they will remember.