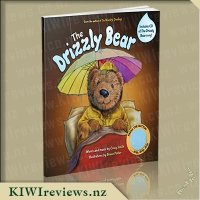 A fun and interactive tale that asks the question "How can a bear fall asleep when there's a hole in the roof and it's raining?"

With an underlying message of hope and optimism, Drizzly Bear shows us that with resourcefulness we can stay happy and continue to dream even through the tough times...

The wonderful illustrations are by Bruce Potter.

Note: This book is slightly more expensive as it is a hard cover and has an interactive button to make the drip noise. 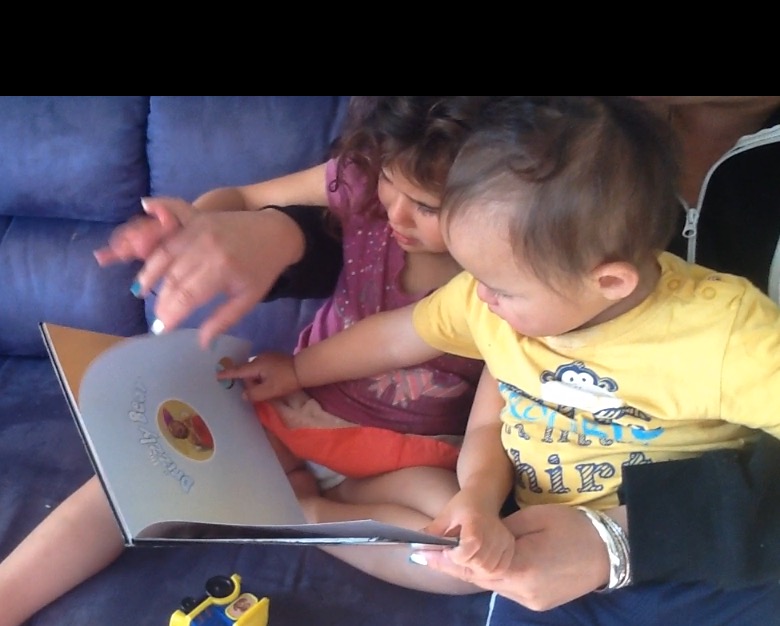 This was such a fun book to read - I have shared it with several children and every one of them was enchanted. It was intended for Mr 14 Months, but his three older sisters were equally fascinated by the story with its magic "drip" button and the accompanying CD, so there were hilarious interactions as they all wanted to press the button at once, and dance to the song on the CD! We all piled on to the sofa to read the story and look at the pictures; this took some time as there was a lot of comment on the detail in each picture. Particularly fascinating was the tiny teddy bear that Drizzly Bear took to bed with him!

Because it is a hard cover book, it is meant to withstand some rough handling by little ones. Although the children have been brought up to respect books and handle them carefully, there are still mishaps - especially when one wants to turn a page, while another wants to stay looking at the current picture! And I could foresee disaster when we realised that the drip button had to be negotiated carefully as its placement meant that much skill was required to prevent it from catching and tearing the paper. For a start, I insisted on turning the pages myself because I thought their enthusiasm might cause issues. However, the problem solved itself - Mr 14 Months managed to push it so hard that it went right through all the holes and detach itself completely. We had not realised that it was designed to do this, but it certainly made page turning a lot simpler!

The actual story is a delight. It is all about solving problems in a common-sense way and not letting them interfere with your enjoyment. Mr 14 Months was a little too young to get the message, but his twin sisters both understood what was happening. His other sister, who is younger than the twins, was fascinated by Bear's smelly feet and though that was the funniest part of the whole book! She told me she was lying on the grass under a tree one day and the rain dripped down on her face, so she covered her face with her sunhat. All four of them loved the repetitive drip-drip-drip and joined in, first with me as I read them the story, and then with the CD as we all sang and chanted along.

As for the illustrations - they are totally charming. We decided the little character at the start was a Dream Rat, bringing sweet dreams to Drizzly Bear and his little teddy. The cave, cosy and brightly lit, appealed to them and one of the girls said she would love to have a bedroom like that as it looked so cool. They were trying to decide whether the little toy teddy had lost its eyes or whether they were just closed, but concluded that it had probably lost its eyes as they have a teddy that has also lost its eye buttons. The water falling on Drizzly Bear's face was shown as a series of falling droplets, with the final picture of the sequence showing his nose being splashed and going up his nose. The Dream Rat appears once Drizzly Bear is sorted with his umbrella and raincoat, leaving a black and white montage of things that the little Bear might dream about. I loved the use of black and white for this image as it contrasted perfectly with the vivid colours of the rest of the book.

So - thumbs up from the four children who thoroughly enjoyed the book, and also from the two other children who checked it out with me earlier. I can see it providing lots more fun for all of them. And now we can't wait for the next book from Craig Smith. Hopefully it will not be too far away!

Learn to think like an artist - and draw like one, too!!
From flowers and still lifes to landscapes and family portraits - you can learn how to draw in just 15 simple, fun lessons.
All you need to get started is some basic equipment and a sketchbook. Then just follow the step-by-step directions to learn time-tested techniques for using pencils, pens, pastels, and charcoal and watch your artwork form before your ... more...