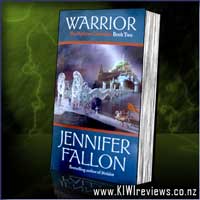 Marla's fortune may not be enough to protect herself and her family ... especially her son, Damin, growing up far away in Krakandar. Damin's uncle, Mahkas, has convinced himself that his only daughter is destined to marry her cousin, but his obsession leads to the unexpected and tragic results.

Meanwhile, Elezaar the Fool, Marla's greatest confidante, must face his own crisis, and his infamous Rules of Gaining and Wielding Power are of no use to him when his brother is involved...

This is the trilogy that made me a Fallon addict for life. I read 'Wolfblade' first, and the development of Marla was fascinating, but 'Warrior' just takes it to a whole new level.

The 'Fantasy-ness' isn't too out-there, which makes this quite a nice read without the bother of creating a complete new universe inside the imagination. However, Fallon's writing style is such that it is possible to completely immerse yourself in the storyline, and lose track of time and space.

From the prologue to 'Warrior', I was already anxiously glued to the page wondering what was going to happen. There were a few lulls in the tension, obviously, but overall a rather gripping read. Plot is not airtight but still very well thought-out and has it's little twists.

There are some 'adult-oriented' suggestions throughout the book (and indeed, throughout both 'The Hythrun Chronicles' and 'The Demon Child' trilogies which have linked plots), but it is suitably vague, tasteful and only brought to the reader's attention when it has real value to the events taking place in the plot.

Marla's political games are particularly well thought out and the reactions of other parties realistic and logical.

Without giving too much of the plot away, this is all-in-all a very good read, and definitely some of Fallon's best work.

And there may or may not have been several undisclosed moments where there could have been a tear or two shed... Maybe. But don't tell anyone.

Hours of fun for the kids - and the adults! The Looky Book is a puzzle book mostly for young children with 11 different puzzles all with colourful New Zealand landscapes, birds and animals.

Find the numbers with the crazy All Black lambs, spot the difference: the mischievous keas have changed around somebody's campervan, find the animals hidden deep in the bush, match the farmers to their animals.