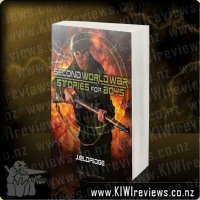 A spitfire pilots dog-fights in the skies over Britain, a tank driver's daring escape in the deserts of Africa, a heart stopping sabotage mission through the jungles of Burma.

You know how sometimes you pick up a book and expect that it is not going to be as good as the cover depicts. Well that is exactly how I felt about this book, maybe because I am not a boy or maybe because I am not big on war type stories. I don't know but either way I was wrong. Hubby had read the book in 2 days, as did master 12...impressive on both accounts!

I was shocked to find that I thoroughly enjoyed this book. and have started reading it a second time around with my younger son who is not an accomplished reader. The book has three stories in it: Deadly Skies which sees John Smith a spitfire pilot in the midst of the Battle of Britain, Tank Attack where John witnesses the Battle of Al Alamein behind the tank in North Africa and Behind Enemy Lines in South East Asia in 1943 where John must take a dangerous commando mission.

Each story is enthralling, gripping and enough to challenge any young man's thoughts and fears. It brings the reality of war alive with each gripping word. And it is easy to feel sorrow and heartache and one thinks of what many endured during the world wars and the pain that the soldiers and their families, friends and loved ones went through during this time. This is one of those books that can be read over and over again, but also one that makes you appreciate the life you have now and why you have it. A really great read at a really great price.

Well, this book is a great one that combines fact, history, realism, and adventure into 3 stories based on the Second World War. I could tell that these stories were only based on the conditions that soldiers during this 6-year period of hell.

The thing that revealed this to me was the fact that the main characters in all the stories were named John Smith, so either this one person did all the things that the character did in each story, or it was just a made up person that the author didn't find different names for.

My favourite story was the first one, "Deadly Skies", as it is about a soldier who flies a Spitfire plane and I am a big fan of aircraft, I even want to learn how to fly a Microlight plane one day!

The price of this book is okay, although it is pushing against the limits of what is a good price. Except for this one downside, this book is a great one, and I will probably read it again sometime. Happy reading!

"It's the ghost bell," Wiri whispered. "It's bad luck, they reckon."
"What kind of bad luck?" asked Rona.
"They say when the bell rings, someone's going to die..."

Not what Rona wants to hear when her father's lying critically ill in hospital. But when Wiri finds an old mariner's diary, which gives clues to the source of the ghost bell, Wiri and Rona go searching for it - with dangerous consequences. Perhaps the bell isn't ... more...