Home > Categories > Books > Personal Development > The Journey: How I Cheated Death And Cured My Diabetes In 21 Days review

ProdID: 7405 - The Journey: How I Cheated Death And Cured My Diabetes In 21 Days -  Written by Ernest Quansah 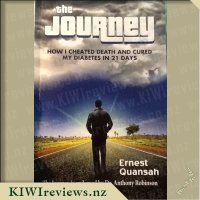 The Journey: How I Cheated Death And Cured My Diabetes In 21 Days product reviews

Ernest Quansah almost lost his life to Type 2 diabetes. When he was diagnosed, the sugar buildup in his body had begun to seep from his tongue and the corners of his eyes as a sticky substance. Ernest's diabetes was managed medically with pharmaceutical drugs for two years, according to standard procedure. But after hearing from his doctor that Type 2 diabetes was curable, Ernest threw himself into researching the cause of the condition and how to reverse it.

With the guidance and assistance of his physician, a pharmacist, a doctor of Chinese medicine, and a naturopathic doctor, he formulated the three-part Type 2 Diabetes Self-Cure Program and made himself the test subject. After three weeks, his energy had surged and his health improved remarkably.

NOTE: The author has informed us that this title has been pulled from the market.

There are many things that this book has going for it. It is easy to read - Quansah writes in a conversational style which is accessible to most readers irrespective of their medical background. This is an important point as self-help books that are too technical or too academic can be daunting for many people, some of them the very people who may be in need of that help. Its message is largely common sense advice on eating sensibly, exercising, taking vitamin supplements, and generally pursuing a healthier lifestyle. Taking Quansah's suggestions and acting on them is a no-brainer; not only diabetes, but many other conditions, can be alleviated and in some instances completely dispelled when lifestyle choices are appropriate.

So what can this book offer to someone who is hoping for a cure? As an inspirational advocate for his cause, Quansah is a compelling writer. He enthusiastically traces his own journey to health, including before-and-after statistics showing his personal development together with quotes from diverse medical personnel who have had input into his lifestyle change. It is clear that he is passionate about putting his case and urging Type 2 diabetics to be wary of becoming the pawns of various sales campaigners, whether from multinational pharmaceutical companies or from alternative medicine practitioners, rather than asserting their right to self-cure. He talks about the greed of drug companies and other providers and the way they organise get-rich schemes by preying on a perceived need for ongoing medical intervention to maintain a workable lifestyle around the challenges of being a Type 2 diabetic.

While I commend the author for his excitement in having overcome his condition and regained full health, I would be wary of assuming that this is going to be the case for other people. He quotes various doctors as having confirmed his altered health status, but for this to be regarded as authentic evidence there needs to be robust supporting data in the form of verified laboratory test reports which form part of an extensive study, and supporting paperwork needs to be peer reviewed. It is tempting to accept Quansah's arguments as they stand, but it is necessary to accept also that some people may have underlying medical conditions that could impact on their overall recovery. These conditions may be established only after exhaustive monitoring and medical testing

I consulted a work colleague who also has Type 2 diabetes and asked his opinion on the methods outlined in the book. He took it away overnight and, independently of what I had already written, told me that he had followed a similar regime on his own but the symptoms have since returned so unfortunately there was no miracle cure for him. He continues to monitor his own diet and exercise program, and touches base regularly with his doctor, but without a permanent cure. However, he did concede that following a healthy lifestyle has meant that his symptoms are far less invasive than they otherwise could have been, and he is convinced that he would certainly be far worse off had he not looked after his health. He has never been a drinker or smoker, is slightly overweight but not obese, and has always been involved in sport of some kind.

In the course of the book, the reader is referred frequently to the author's website. I explored this and found it quite difficult to navigate. Some of the links were to other material which was available for purchase; others linked back to similar information and tables to illustrate various points that had already been made. I can see that some of these links might be useful to explore, but it defeats the purpose when you are reading a book which is meant to be portable so you can take it along specifically to read when you are out of internet range. I first read it when I was on an overnight camping trip and had to wait till I got home in order to explore the web links at all.

So - read the book, be happy that Quansah has overcome a serious illness, and by all means follow the dietary and lifestyle changes he advocates. These are both reasonable and health-promoting, and will certainly do no harm. As my friend said, he would probably be a lot less healthy had he not made some radical dietary adjustments to his own lifestyle. At the same time, be sceptical and check out any health issues with your own medical professional. Quansah's cure is not a one-size-fits-all because everyone is different. Many Type 2 diabetics are actually helped by the products of the multinationals. Any condition that exhibits physiological and chemical changes in the body may respond to self-cure, but in a number of cases it will need a combination of lifestyle change and prescribed drug therapy.

Before they were guardians, they were lone heroes protecting the universe. Now, in the far reaches of the galaxy, a ragtag band of underdogs must unite to defeat a cosmic force of epic proportions.