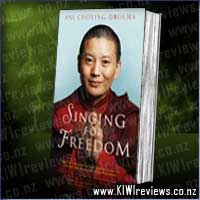 Disclosure StatementFULL DISCLOSURE: A number of units of this product have, at some time, been supplied to KIWIreviews by Allen & Unwin or their agents for the purposes of unbiased, independent reviews. No fee was accepted by KIWIreviews or the reviewers themselves - these are genuine, unpaid consumer reviews.
Available:
June 2009

As a young girl, Ani Choying escaped her violent home for a monastery in Nepal. One day, an American jazz guitarist heard the young nun sing and was so enthralled by her voice that he recorded an album with her. The pay cheque enabled Ani Choying to open the Arya Tara School, just outside Kathmandu, offering shelter and education to sixty disadvantaged girls. Ani Choying now tours the world giving concerts, driven by her desire to help her young Nepalese charges. In Singing for Freedom, she tells her shocking and inspiring story.

Written by Ani Choying, this vivid and incredibly honest story is Ani's re-telling of her life story and the journey she has travelled to become the powerful woman she is today. In parts feminist, in others Buddhist, and just totally human, this book is a pleasure to read.

I think, more than anything, the way Ani Choying was able to overcome her abusive childhood and, with her love, transform her parents was just amazing -- inspirational actually. I finished reading this book feeling like I had grown as a person.

You don't have to be Buddhist to enjoy this. In fact, no matter which religion you come from, Ani Choying's story will ring true. There is not much more I can say about this - it is a story that needs to be experienced to be understood, but the journey is definitely worth the effort.

The eye-catching companion volume to The Reader's Digest Children's Atlas of the World.