The Boy in the Striped Pyjamas review 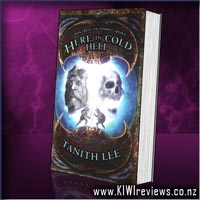 Disclosure StatementFULL DISCLOSURE: A number of units of this product have, at some time, been supplied to KIWIreviews by Macmillan Publishers Ltd or their agents for the purposes of unbiased, independent reviews. No fee was accepted by KIWIreviews or the reviewers themselves - these are genuine, unpaid consumer reviews.
Available:
October 2005

As Lionwolf struggles in the toils of hell, elsewhere throughout the ice age shrouding the mortal earth, men and women are working out their own destinies... An empire has fallen. Ru Karismi, capital of the kings, has been abandoned to the poisons of the White Death. And across the lands of the Jafn and the Ruk, lawless reivers take their prey wherever they wish.

Against this unsettled backdrop, the sorceress Jemhara determines to save the Magikoy Thryfe from a dire self-inflicted punishment, while the hero's mother, Saphay, now become a goddess of the far north, seeks to lead her followers to a new world.

In this, the second book in the "Lionwolf Trilogy" from long-standing author Tanith Lee, we are taken to the hell-world of the fallen Manchild Vashdran, aka The Lionwolf, halfling son of a mortal mother, Rukarian Princess Saphay, and a god of the Rukarian pantheon, Zeth Zezeth, the Sun Wolf, who stole her away underwater and raped her. It's a convoluted story, full of twists and rapid scene jumps... as is common for tales that involve time travel, be it of a godly or scientific nature.
With the greater majority of the story focussing on the fallen 'hero' and his attempts to cope with a personal hell dimension inhabited by others who (probably) died in the devastating defence of the capitol of the Rikarian Kingdom, Ru Karismi, but who are complete strangers in this frozen hell-world, I found the tale quite hard to stay 'attached' to as I read, because let's face it, in Hell, all rules governing 'the normal world' are just not going to stay fixed for long... such as people and animals that appear from the living stone walls of a monolithic fortress city, and fade into nothing when their purpose is served, flowers with eyes and mouths inside their centers, plus lots more, which I won't go into, or else spoil the story.
ä great second-helping of Tanith's Vashdran tale... with all the twists and turns, characters that died coming back into the story, new godlings appearing... it's a rollercoaster ride of fantasy that the die-hards will love, the beginners will plow through, and the neophites like me will find absolutely absorbing... roll on Book 3!

Two princes, each an heir to a faerie kingdom, set off to find two faerie brides. Before long, they meet two lovely princesses and believe their search is over. But alas, one sister becomes jealous of the other, and casts a wicked spell upon her. The princes' wedding plans are thrown into disarray, and one prince seems set to lose his kingdom . . .