« Embassy Row 1 - All Fall Down review 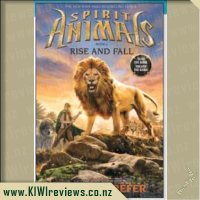 Disclosure StatementFULL DISCLOSURE: A number of units of this product have, at some time, been supplied to KIWIreviews by Scholastic (NZ) or their agents for the purposes of unbiased, independent reviews. No fee was accepted by KIWIreviews or the reviewers themselves - these are genuine, unpaid consumer reviews.
Available:
January 2015

As a team, Conor, Abeke, Meilin and Rollan have achieved the impossible before. But now that team is broken, the friends scattered by a devastating betrayal. The young heroes and their spirit animals have already sacrificed much in their quest for the talismans. But with the world crumbling all around them and a ruthless enemy opposing their every move. Their greatest sacrifices are yet to come.

The Legend of Sigurd & Gudrun
Rating: 7.5

It feels like a long time since I read the last book in this series so had to read in for a little while before I got back into the swing of the storyline again. This has been quite a different series for me because I am usually not interested in fantasy style texts but with the children in the book it becomes a bit more real world. I do actually love the idea of having your own spirit animal as I am a bit of an animal lover myself. And the four main spirit animals in this story are all pretty cool.

Meilin, Rollan, Abeke and Conor have come along way in this series growing ever stronger in their abilities with the help of their spirit animals and the talismans they have collected along the way. However it seems in this book the conquerors are getting even more powerful and you are left wondering how the children will get the talisman of the great lion as they are in danger at every turn.

As with past books we have losses almost at the start of this book we see the loss of one of the green cloaks so it is a little sad reading the book but with the end now in sight (one book to go) hopefully we can get to the end of the series and have the children get the final talisman to defeat the conquerors and save Erdas. I am actually quite excited to see how they bring the series to conclusion as so far it has been ever changing and treachorous for all involved.

This book series has come quite a long way from what it started off as, the plot has thickened to quite a suspenseful "consistency", and this book has definitely paved a bumpy road for the series conclusion. So far, most of the Great Beast's talismans, but now there is only one left they can get to, so the race to prevent the Conquerors winning has now gotten highly intense! Over the course of the previous books, the 4 characters have learned some ridiculously cool stuff that they can do thanks to their bond to their spirit animals, and in this book, they have managed to get out of some seemingly impossible situations using both their abilities as well as the powers of the talismans they possessed. I thought that these little escapes were quite creative and imaginative, so I would like to give kudos to the author for successfully managing to close those little scenes off nice and neatly.

The book was well structured, and alternated between the perspectives of each of the characters, and whenever this happened on a cliffhanger, it sort of gave me an incentive to keep reading in order to find out what happened next, so this was a nice little "carrot on a stick" structure, which certainly worked. There was the odd occasion where I would be reading the book and my emotions would just synchronize to the mood of that particular section of the story, and that phenomenon's presence in the book is great, as it helps to engage the reader in the story, it makes them feel like they are a spectator of an actual event going on in the book, and that level of engagement works in the book's favour.

The storyline was anything but boring to read, I think there were some good twists and bends in the story which defied anything I thought would happen, and being kept in the dark most of the way made the experience a lot more enjoyable for me. Also, the blurb on the back cover wasn't lying when it said that the character's biggest sacrifices were yet to come, and sure enough, there were a couple of moments which I think will have a large impact on the story which will unfold in the next book

Overall, I think this book is a great semi-conclusion to this series, and has now set the board for the final endgame, which I await with open arms and an open mind!

Shopkins are the hottest new collectible toy. Each fun figurine looks like a miniature grocery store product. The Ultimate Collector Guide is the essential handbook for every Shopkins fan. Learn about Apple Blossom, Strawberry Kiss, Cheeky Chocolate and their friends.

This book contains all the Shopkins from Seasons 1 and 2, including rare and special editions. Plus, it comes with a cool collector's checklist and an exclusive poster. So grab your cart and collect them all, because once you shop, you ca not stop.