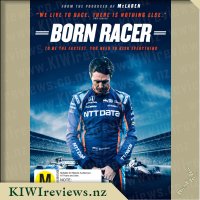 Disclosure StatementFULL DISCLOSURE: A number of units of this product have, at some time, been supplied to KIWIreviews by Universal Pictures NZ or their agents for the purposes of unbiased, independent reviews. No fee was accepted by KIWIreviews or the reviewers themselves - these are genuine, unpaid consumer reviews.
Available:
at selected retailers

Four-time champion Scott Dixon and his team face danger and risk their lives to win.

I thought a movie about five-time IndyCar champion Scott Dixon would be interesting viewing. I do usually tend to enjoy watching origin stories or watching the underdog become the champion; even more so when it is a documentary of sorts, based on a New Zealander. But Born Racer: The Scott Dixon Story doesn't really seem to know what it wants to be.

Not so much the whole story of Scott Dixon, Born Racer follows Dixon during the 2017 IndyCar season as he attempts to rack up his fifth championship win. The piece focuses on this single season, with a few little bits of his history and upbringing added in from running basic go-karts to the professional machines he pilots now. The whole premise is practically non-existent as if they simply wanted to find a use for all the footage they have of him, but it was all over a very narrow window of his career.

The Scott Dixon story is a rather tentative look at the man. While it does provide a better scope of who he is as a person, it does not go too deep into things; again feeling like an unauthorised documentary, that only has the best side of him on display.

What it does do reasonably well, is to highlight the importance of the team over the man. Scott Dixon's success is heavily reliant on a well functioning team, and the very significant effects of every slight delay on his position in the race are made abundantly clear. In a way, it does paint Dixon as this perfect driving machine that is held back only by his crew, but I prefer to see this team of people that have been by his side--some for over 25 years--as the reason that he has been able to succeed to the degree that he has.

There are certainly intriguing aspects of the IndyCar sport, and for someone not very well versed in motorsports, it was a surprise to see how much of a team sport it was. To see how much trust and confidence you need to have in all of the other drivers despite the fact that you are all vying for the same goal. And to see the emotional toll that IndyCar can have, humanises a very mechanical sport.

To see the love and loyalty between Dixon and his wife, knowing that he has to push all emotional connections away for every race to be able to drive on instinct; because thinking is too slow and can result in death. It takes a strong connection to work with that. To see your closest friends die and keep driving is a level of dedication you don't think about.

I really don't know what they were going for here. This is no documentary. This is no movie. There is no real direction. What we have is Scott Dixon's 2017 IndyCar highlights with some added behind-the-scenes pieces. Something that a motorsport fan would no doubt enjoy, but for someone like myself--that doesn't follow the sport and was hoping to find a thrilling, action-packed story that would teach me the ins and outs of the IndyCar sport and how Scott Dixon got to where he is--it will be lacking in substance.

Score: 4.0
Product reviews for listing 5032: You Don't Mess With the Zohan -  Directed by Dennis Dennis Dugan

Lather.
Rinse.
Save The world.

Comedy superstar Adam Sandler is back - and funnier than ever - as The Zohan, the finest counter-terrorist agent the Israeli army has. That is, until he fakes his death and travels to Manhattan to live his dream... as a hairdresser. Now this skilled fighting machine who used to clip bad guys is out to prove he can make the cut as a top stylist.

All goes silky smooth until his cover ... more...