The Wiggles - You Make Me Feel Like Dancing review 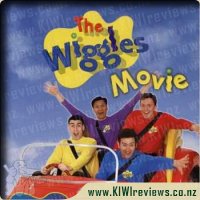 Get Ready For A Wiggling Good Time.

The Wiggles have become one of the most popular and successful performing acts in Australia, in any age group. Now in their tenth big year, the Wiggles continue to entertain more and more children around the world. With over 80 minutes including 7 new songs!

Reviewing this on behalf of my children, they love it, need I say more? But because its a review I will.

My kids love the wiggles just like I did when I was little, my nana had every single video the wiggles made and then I got the kids the movie since my son (2 at the time) asked for it. I have lost count of how many times they have watched this movie, but they love it.

We talk while the movie is on, me asking them questions like o where did that go etc and they will answer the questions, they attention span is great for my kids they will sit and watch it every single time and get up and dance. The story line for adults well its not that interesting but for the kids they don't really care after all the movie was made for kids.

The usual are there like Wags and his puppies, Henry and his underwater band, Dorothy, captain feather-sword and his crew. Then you have the wiggles themselves (Grey, Anthony, Marry and Jeff), then you have new actors in the movie. If you like the wiggles you might just like the songs in the movie but as a child and prob a young child under 5 will like the movie. Personally I wouldnt go to the movies to see it.

Although our household are huge fans of The Wiggles and I was keen to buy The Wiggles Movie for my daughters I just doesn't appeal to me. To me, it reminds me of the movies that rock stars like Cliff Richard and Elvis Presley did. The singing is great and includes so many of the classic Wiggles songs but the storyline is weak and an excuse to string the songs together. The acting is even worse.

My husband and I cringe whenever the girls request The Wiggles Movie and thankfully it isn't very often. I find it doesn't keep their attention throughout like our other Wiggles DVDs do. I will happily sit down and watch The Wiggles with my girls but not the movie. The Wiggles have obviously realised this and stuck to what they are good at. the stage and simple kids songs. Thankfully there have been no more movies from them.

The Wiggles Movie is an 83 minute adventure featuring Dorothy, Henry the Octopus and Wags the Dog as well as the original Wiggles line-up (Greg in Yellow instead of Sam). The movie was made in 1997. It hasn't aged well. I don't believe the production costs would have been very high. The costumes are drab and severely stuck in the early 90s. There are some promising special effects as the Wiggles race around trying to find their friend, but its obvious they couldn't afford a lot.

There are two plots at odds with each other through the whole movie. So the Wiggles have their end goal and then there is a Magician with his own agenda. Its a bit Benny Hill in the way they are all rushing around not getting anywhere (only way less funny and without the Benny Hill theme song!). They do play on the Wiggles original gimmicks. So Greg is very into magic, Anthony is very into eating, Jeff is always asleep, etc.

The magic illusions are quite neat and as I was a magician's assistant in an earlier life, I do enjoy watching those parts. But otherwise its hard going to watch it. The Wiggles themselves seem so self-conscious, and they overact terribly. As does the rest of the cast. We have watched it quite a few times because my daughter does enjoy the movie format. For me I'd be happy with once a year.

There is an old ghost story in the sleepy town of Ravens Fair about Mary Shaw, a ventriloquist who went mad. Accused of the murder of a young boy, she was hunted down by vengeful townspeople who cut out her tongue and killed her. They buried her along ... more...