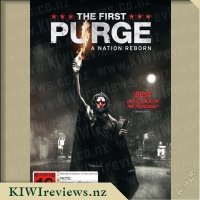 Blumhouse Productions welcomes you to the movement that began as a simple experiment: The First Purge.

To push the crime rate below one percent for the rest of the year, the New Founding Fathers of America test a sociological theory that vents aggression for one night in one isolated community. But when the violence of the oppressor meets the rage of the marginalised, the contagion will explode from the trial-city borders and spread across the nation.

I must admit I was intrigued when I had the opportunity to review The First Purge as I had been blown away with last years Blumhouse Productions hit Get Out. The First Purge is the forth film in the American horror franchise which are based on a future dystopian American where all crime is made legal once a year. I have to note that this is the only film that I have watched in the franchise.

The First Purge is set in the mid 21st Century in a time of economic and social turmoil in the United States. In order to reduce the crime rate, Staten Island is chosen as the location for 'the Purge' where residents are paid $5000 to stay on the Island for a 24 hour period knowing that anything can happen and no-one will be held accountable for their actions. The First Purge is an action packed movie that has it all, tension, sex, drugs and extreme violence and I must admit, I was surprised it had a Restricted 16 classification.

Apart from Marisa Tomei, there were no big name actors in the movie which, for me, made the characters seem more believable. Marisa Tomei convincingly plays Dr. Updale, or 'The Architect' who devised the social experiment and monitors it's progression. The three main characters, brother and sister Nya (Lex Scott Davis) and Isaiah (Joivan Wade) and drug dealer Dmitri (Y'lan Noel) were standout for me and kept the action going in a quest to protect themselves and their community. Through these characters, the viewer gets an insight into the political oppression, white supremacy and abuse of power which is scarily still happening today for many African American's. The tension mounts during the movie as most of it is filmed at night with the use of close up camera angles and many 'extra's are wearing scary masks!

Blumhouse Productions are renowned for producing low budget horror films so my expectations were low prior to viewing. I have to admit that despite the grueling and often extreme violence, this was an enjoyable movie with a story about social injustice and the power of resistance. There was a welcome plot twist and there were plot holes and some of the questions I had during the movie weren't answered but if you liked the previous 'Purge' movies and low budget horror movies, you'll thoroughly enjoy this!