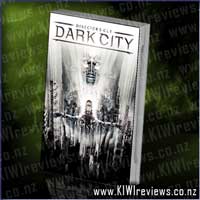 Disclosure StatementFULL DISCLOSURE: A number of units of this product have, at some time, been supplied to KIWIreviews by Roadshow (NZ) Ltd or their agents for the purposes of unbiased, independent reviews. No fee was accepted by KIWIreviews or the reviewers themselves - these are genuine, unpaid consumer reviews.
Available:
November 2008

When John Murdock wakes up with no memory at the scene of a grisly murder, he soon finds himself hunted by the police, a woman claiming to be his wife, and a mysterious group of pale men who seem to control everything - and everyone - in the city.

I bought this movie when on my honeymoon due to my husband saying that he had heard good things about the movie though he couldn't recall what was good about it or who told him that, however it was such a good price that we figured why not and grabbed a copy to own. Seven years later it is still in our possession so although it is a very, very strange move it is at the same time a really good movie. The whole premise of this is that a man awakens with amnesia, accused of a series of murders, a wife he doesn't recognize and a whole lot of secrets that are about to change his world.

The acting in this is really well done and has some good names in it, Jennifer Connoly, William Hurt, Keifer Sutherland and so on, so a great amount of talent in this movie which takes a movie that could have been a complete flop and turns it into a strange but well done film that has you skipping from one moment to another, backwards and forwards and it can be a little hard to follow at times. The special effects in this are really well done, there are times when the whole city is twisting, turning, houses shifting and appearing as well as the abilities possessed by some of the characters.

All in all a very odd film but worth a watch.

Its been many years since I last Richard O'Brien in anything and though I would hardly say there was much similarity between this movie and the Rocky Horror Picture Show it still has a similar feel to it. Dark, wierd, identity confused. Totally enjoyable to watch in a strange 'hypnotised by the oncoming headlights' kind of way. A stunning performance by Jennifer Connelly, one of her best since "Labyrinth". One of the things that made the movie so memorable was the huge number of abrupt cuts. There was a scene shift almost every 2 seconds which just added to the sense of confusion and staying off-balance. It really added to the atmosphere of the movie. The story itself was a little wierd and lacked a certain depth but it was more than made up for by the special effects and the characters who remained engaging right the way through. I swear I recognise some of the buildings from other movies but the most memorable scenes were those where the buildings warped and shifted, and even grew up out of the ground. All in all a great mind-trip of a movie for those who like a bit of the darker side of things. Other movies I would group with this would be The Matrix trilogy and the first two movies from The Crow saga.

Get ready for the Daddy of all family comedies!

When it comes to raising their kids, Dusty (Mark Wahlberg) and Brad (Will Farrell) finally have this co-parenting thing down. That is, until Dusty's macho dad (Mel Gibson) and Brad's sweet-natured father (John Lithgow) come to town, throwing the whole family into complete chaos.

As old rivalries create new problems, Dusty and brad's partnership is put to the ultimate test in this 'hilarious and heartwarming' comedy that gives new meaning to the term 'blended family'.