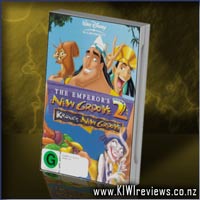 Before you can say "squeaker, squeak," Kronk is cooking up trouble with the sly enchantress, Yzma, trying to make himself look like a success in time for Papi's arrival. After a bunch of big blunders and a massive cheese explosion in the restaurant, Kronk finds himself covered in a heap of trouble. It is only with the help of friends both old and new that Kronk learns to be true to his groove.

This Disney sequel is a lot of laughs and despite the title doesnt revolve around the egocentric but loveable Emporer Kuzco. This time it is the turn of Kronk, the once-evil-henchman of the immoral and somewhat insane Ysma. He has turned over a new leaf and is now in a major pickle. As he grew up his father told him that to be 'successful' and avoid the 'nostril flare of utter rejection' Kronk needed to have a wife and kids and a house on a hill. After getting caught up in another of Ysma's diabolical plans for riches Kronk ends up with the big house on the hill and the girl who could be the future wife and mother. But when he realises he was tricked by Ysma into betraying his friends Kronk gives it all up and becomes head fry cook and senior delivery boy for a local diner. This is not what Papi would consider success and kronk will not get the ever elusive Big Thumbs Up. But when papi arrives and all of Kronk's friends rally around to offer him loyal support Kronk realises he has all he needs and Papi realises Kronk is a bigger success than he could ever have hoped for. Kronk gets his Big Thumbs Up. And the girl. With only a few songs and dance numbers the movie isnt a Disney Musical which is all good in my books. My sprog loved it despite intial resistance because it looked like it "...has too much silly stuff..." but after a 10-minute trial it was all good. A fun movie with layers of humour for adults and kids alike. It even has a good moral throughout that fair play and honesty will get you what you need even if its not what you think you want.

Score: 9.8
Product reviews for listing 7892: The Mountain Between Us -  Directed by Hany Abu-Assad

When a plane they've chartered to beat a storm crashes in a remote mountain area, two strangers (Elba and Winslet) must trust each other in order to survive the extreme elements. With little hope of rescue they begin a perilous journey that will shape the course of their lives.