Doctor Who - Genesis of the Daleks review 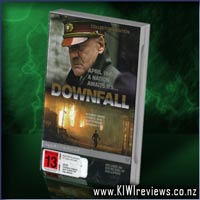 Disclosure StatementFULL DISCLOSURE: A number of units of this product have, at some time, been supplied to KIWIreviews by Roadshow (NZ) Ltd or their agents for the purposes of unbiased, independent reviews. No fee was accepted by KIWIreviews or the reviewers themselves - these are genuine, unpaid consumer reviews.
Available:
May 2006

An Academy Award nominee for Best Foreign Language film and a world-wide success. Downfall looks at the last fortnight of Adolf Hitler's life; his inner circle - Eva Braun, Joseph and Magde Goebels, Himmler, Speer; and the chaos of a country coming apart at the seams.

Shifting between the bizarre atmosphere in Hitler's concrete bunker in April 1945 as the Allies advance on Berlin and the Third Reich crumbles, and with the hopeless war raging above as civilian and soldiers fight on the streets as the Soviet Army turns the city into a pile of rubble. Not so much a 'Hitler' movie, Downfall is a portrait of a totalitarian machine's spiritual and emotional collapse.

Based on two recent bestsellers, including 'Until the final hour', the personal account of Hitler's secretary, Traudl Junge, director Oliver Hirschbiegel's recreation of war-torn Berlin is massive and convincing, including meticulous design and stunning cinematography. The acting is exemplary, and Bruno Ganz who plays Hitler, makes the role startlingly real, creating a believable tyrant - crazy, murderous and seductive, yet oozing a strange kindness to some that makes his deadly, hateful rages all the more chilling.

Downfall puts the dark past in the vivid present tense, and makes it resonate anew. An extraordinarily gripping and important work, Downfall succeeds in saying so much not only about the horrors of the 20th century, but about human nature as well.

I agree entirely with Diogenes. I couldn't tear myself away from this DVD as the madness and futility of Hitler's last days were revealed. Behind the incredible power, evil and control of Hitler was a man who was watching his dreams collapse; a man who was vulnerable.

The film took us into that bunker in Berlin on those last terrible days as the city was pounded into submission by the Russian army, and we were there as Hitler, his generals, advisors and friends scrabbled in the dust of defeat for hope of victory. We are shown the courage, the fear and the madness as soldiers and children fought side by side in the streets, and we are shown the true madness of war when soldiers executed old men for hiding in their homes.

This is a powerful video, and the extra disc has interviews with the stars and biographies of the characters they played, including interviews with the woman who was Hitler's PA (now dead). Like Diogenes I simply can't reccomend this film highly enough whether you are a history student, a pacifist or simply want to learn more about a man that shaped the world we all live in.

A perfect ten for this film, and when you watch it, you will instantly see why a perfect score is so richly deserved.

Far from glamourising war, as many films do, Downfall portrays the final few days of Hitler and his regime in a brutal, and gripping reality. The film is filmed in German (Because it is a german-made film) with English subtitles, which removes the crassness of many other films where all the Germans speak in an accented English (or worse, and German accented American). The director has gone for historical accuracy over a glamourised story, and that approach, combined with showing the human side of the men behind the regime, made the film all the more harrowing to watch - knowing there is the history and accuracy behind the film.

The actor playing Hitler portrays him in a very human manner, which considering the evil nature of the man, it is easy to forget Hitler was human too. Ganz looks convincing, and has a complex character to play, and plays him well. The stills of Ganz as Hitler are as menacing as the photographs of Hitler himself.
The whole cast, crew and writers of the film have done an execellent job in bringing this production first to the big screen, and now to DVD.

I could rave about this film for another thousand words or more, but in short, you must see this one for yourself. The true horror can only be viewed by you.

Alderson (Julian Richings) awakens in a cell, seeks an exit, and arrives in an adjacent cube where he's sliced and diced. Former cop ... more...