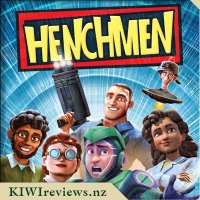 Disclosure StatementFULL DISCLOSURE: A number of units of this product have, at some time, been supplied to KIWIreviews by Rialto Distribution or their agents for the purposes of unbiased, independent reviews. No fee was accepted by KIWIreviews or the reviewers themselves - these are genuine, unpaid consumer reviews.
Available:
in cinemas November 2021

In a world of super-villains, evil schemes and global domination, someone has to take out the trash. Welcome to the world of Henchmen, third class. When a fresh-faced new recruit joins the Union of Evil, he is assigned to a motley crew of blue-collar workers led by fallen henchmen Hank.

But when The Kid accidentally steals a super villain's ultimate weapon, Hank must break his risk-nothing code to save the boy he's befriended, even if it means becoming the one thing he has always avoided being: a hero.

There's a long list of movies about superheroes, and even a decent list of supervillain stories too, so to find a movie based entirely on the day-to-day adventures of the henchmen - the often-overlooked, behind-the-scenes workers that toil away so that the mastermind has something to gloat about, briefly, was a real treat. A new perspective on the constant battle between good and evil.

When a wannabe villain signs up to join the Union of Evil - the organisation that manages the labour pool of henchmen - he brings with him all the energy, excitement and glee of a newbie. He also bring a considerable portion of chaos and insanity, which catapults him into the biggest adventure yet. His very first day causes the defeat of a supervillain and the second demotion of Hank, a henchman who has crossed paths with the new recruit a decade earlier, though neither are aware of it. While this is a new twist on the genre, it's still has the usual predictable twists - after all, the bad guys never win and everything that can go wrong will go wrong when you're on the wrong team, right?

The animation is also far from cutting-edge, evoking the very cartoonish style of 'The Incredibles' and the Minions movies, but it still manages to be quite heart-warming and relateable, despite that. Whether it's the good-natured Hank or the well-meaning Jolene, new recruit Lester or egotistical Captain Superior, there's a character in there that almost anyone can empathise with. That said, despite the PG rating of this movie, it's not necessarily one you might want your kids to pay too much attention to - the themes of rebellion and diving into the fray all headstrong and bulletproof might give younger viewers the wrong message, especially as there are zero parental role-models portrayed herein.

Overall, it's a fun movie by any standards, though not a stand-out by any means. Highlight 'performances' from Alfred Molina as Baron Blackout and Rosario Dawson as Jolene, plus a short but very appropriate performance from Bobcat Goldthwait as Jackalope make this worth a watch on the streaming platform of your choice, but you might find the cost of a cinema ticket leaves you feeling somewhat less than satisfied.

Picking up immediately after the events in Resident Evil: Retribution, Alice (Milla Jovovich) is the only survivor of what was meant to be humanity's final stand against the undead. Now, she must return to where the nightmare began - The Hive in Raccoon City, where the Umbrella Corporation is gathering its forces for a final strike against the only remaining survivors of the apocalypse.