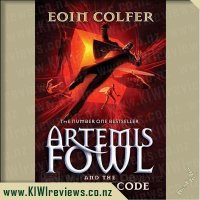 Ever the resourceful young criminal mastermind, Artemis has found a way to construct a supercomputer from stolen fairy technology. Called the "C Cube," it will render all existing human technology obsolete. Artemis then arranges a meeting with a Chicago businessman, Jon Spiro, to offer to suppress the Cube for one year in return for gold, his favorite substance. But the meeting is a trap, and Spiro steals the Cube and mortally injures Butler. Artemis knows his only hope to save Butler lies in fairy magic, so once again he is forced to contact his old rival, Captain Holly Short of the LEPrepcon fairy police. Miraculously, Butler is healed, but there is a catch: he has aged fifteen years. Thus, Butler's infamously ditzy sister, Juliet, is called in as Artemis's bodyguard. Together, they travel to Chicago to steal back the Cube and ensure that Jon Spiro is put out of business-permanently.

Artemis is now thirteen and still up to his old tricks, this time he has created a supercomputer using bits and pieces of fairy technology that he has stolen, he decides to show it to a big man in the mafia, thinking himself invincible but naturally things go wrong and it ends up in the wrong hands. Holly Short of the LEP ends up on the scene when the computer causes everything below to shut down and teams up with Artemis to get it back. What could possibly go wrong now?

As with the previous books in the series you end up going on one heck of a ride with the tough as nails Holly and the clever as anything Artemis, his brain and her brawn works well together. The chemistry between these two characters is so much fun and really does make what could have been a simply sub par story into something full of lots of fun and a few good laugh out loud moments dropped throughout the pages of this book. We continue to bump into characters from the previous books and there are no huge changes, everyone is still essentially the same but since time isn't going too fast we are still dealing with the same issues as before, so continuity is great.

'Bergdorf Blondes are a thing, you know, a New York craze. Absolutely everyone wants to be one, but it's trčs difficult. You wouldn't believe the dedication it takes to be a gorgeous, flaxen-haired, dermatologically perfect New York girl with a life that's fabulous beyond belief.

Honestly, it requires a level of commitment comparable to, say, learning Hebrew or quitting cigarettes.'