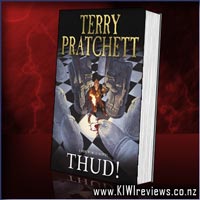 Disclosure StatementFULL DISCLOSURE: A number of units of this product have, at some time, been supplied to KIWIreviews by Penguin Random House or their agents for the purposes of unbiased, independent reviews. No fee was accepted by KIWIreviews or the reviewers themselves - these are genuine, unpaid consumer reviews.
Available:
October 2005

But if he doesn't solve the murder of just one dwarf, Commander Same Vimes of Ankh-Morpork City Watch is going to see it fought again, right outside his office.

With his beloved Watch crumbling around him and war-drums sounding, he must unravel every clue, outwit every assassin and brave any darkness to find the solution. And darkness is following him.

Oh... and at six o'clock every day, without fail, with no excuses, he must go home to read Where's My Cow?, with all the right farmyard noises, to his little boy.

There are some things you have to do.

When the city of Ankh-Morpork's peace is disturbed more than the norm by the nasty doings of "gangs" on Trolls and Dwarves arguing with great force and a few weapons, City Watch Commander Sam Vines' evenings become troubled. His routine reading of "Where's my cow?" to young Sam becomes difficult to keep to schedule, and this annoys him.

The troubles in the city seem centred around mysterious under-city minings carried out by dwarves working for Deep Dwarves, who in turn are working for a purpose even they don't understand, except it calls for more heartless violence against their own. The Trolls are resentful of the rumours that the underground disturbances are their doing. Thus are street corner clashes created. Actually, In many cases, the gangs at each end of a street are forestalled from violence towards each other by the arranged appearance of strong drink - lots of strong drink.

Sam's wife's family clutter - sorry, heirlooms- provide an objet of important understanding of the deeply rooted enmity between dwarf and troll, and Sam is driven - nay possessed - to root out the source of the enmity between the two - er - peoples of his city. The historic battle field - Koom Valley - the first recorded source of the enmity becomes the searching ground for the truth, and it is a race to find the truth first. One of the truths is the reason why his most recent volunteer - a vampire - volunteered to join the watch; she is in fact a spy. But she keeps her job, and her reluctant friendship with another female officer, the werewolf. The Koom Valley secret, deeply hidden and preserved underground, becomes the focus for a new understanding between Dwarf and Troll, while Sam's markings left by the departing Summoning Dark spirit ensure he is well heeded.

Not Pratchett's best Discworld book; but when you've read the rest, you can't pass one by, right?

I have been a fan of TP's works since I first read "The Colour of Magic"... and haven't found anything to cause me to regret it. His works have gone from strength to strength, keeping up to date with current events and right royally turning a satirical mirror on them and showing us just how stupid we can be as a species at times.

In this particular tome, Terry introduces the reader to some broad topics, including "The Jerk Syndrome", a stunning game entitled "Thud!" (Which I SO want to locate or make a copy... if I could just find the rules online somewhere...), and the concept of overcoming ancient hatreds and using what we laughably call our 'civilised brains' to create a peace, any peace, a fair peace... even if it's at the point of a dagger hidden behind our backs.

For the first time in months, I found myself laughing out loud in public, attracting more than a few strange looks... many of which were diverted, to my amused amazement, by uttering just two words... "Terry Pratchett". The concept of a female werewolf and a female vampire, trapped under a venue called "The Pink Pussycat Club" (which was a famous feature of Auckland's K-Road district... I wonder if... hmmm...) during a pole-dancing show, requiring clothing because a) Werewolves can't reconsitute clothing after a morph, and b) Only MALE vampires can reform clothing after a morph... You have to read it to understand why that is so funny, trust me, my words do the scene no justice whatsoever.

While trying to explain to someone who foolishly expressed a total lack of understanding why TP's works are so funny, I was roundly accused of being a zealot... when I asked, with some degree of wounded pride, why they would make such a defamous statement, they pointed to my arm... oustretched, clutching this book in a manner that was instantly recognisable to anyone who has ever seen a street-preacher waving a bible or other holy book... sure enough, I was moving my body in exactly the same manner, right down to the thumping of the hardback cover for emphasis... I think maybe I need to take a break from reading such wonderful books, if they are turning me to such an evangelical mindset.

Overall, this is just another fine example of Terry's mastery of the literary skill commonly referred to as "being a damned fine author" which he has honed throughout the whole of the Discworld series. If you are a fan of Pratchett's, I daresay you already have this, or are waiting for it to be published in paperback form. If you haven't read any of his Discworld books, you are missing out on something truely, remarkably funny.

It's the return of Point Horror for the internet generation! Don't open the door, Don't answer your phone. And, whatever you do, don't turn on your computer...Jason has met the perfect girl. OK, so maybe he hasn't actually met Lacey yet but they talk online all the time. Yet despite spending most nights chatting, Lacey refuses to meet up in person.