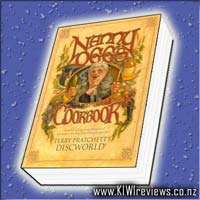 Disclosure StatementFULL DISCLOSURE: A number of units of this product have, at some time, been supplied to KIWIreviews by Penguin Random House or their agents for the purposes of unbiased, independent reviews. No fee was accepted by KIWIreviews or the reviewers themselves - these are genuine, unpaid consumer reviews.
Available:
November 2001

'They say that the way to a man's heart is through his stomach, which just goes to show they're as confused about anatomy as they gen'rally are about everything else, unless they're talking about instructions on how to stab him, in which case a better way is up and under the ribcage. Anyway, we do not live ina perfect world and it is foresighted and useful for a young woman to become proficient in those arts which will keep a weak-willed man from straying. Learning to cook is also useful.'

Nanny Ogg, one of Discworld's most famous witches, is passing on some of her huge collection of tasty and above all interesting recipes, since everyone else is doing it. But in addition to the delights of the Strawberry Wobbler and Nobby's Mum's Distressed Pudding, Mrs Ogg imparts her thoughts on life, death, etiquette ('If you go to other people's funerals they'll be sure to come to yours'), courtship, children and weddings, all in a refined style that should not offend the most delicate of sensibilities. Well, not much.

Most of the recipes have been tried out on people who are still alive.

Gytha 'Nanny' Ogg is certainly one of the more colourful and irreverent characters residing on the incarnate plane of the Discworld. Having never enjoyed the experience of reading The Joye of Snacks or Mother Ogg's Tales for Tiny Folk, the chance to read the almost infamous Cookbook was irresistable.

What stuck me the most was that the greater majority of the recipes actually sound not only possible, but downright delectable! I fully plan to make more than a few of them in time.

As for the rest, well, common sense and a hearty outlook on life is always good, especially if you have little 'editorial alterations' throught in true Pratchett wit.

Overall, an excellent addition to the Discworld universe. May there be many more to come.