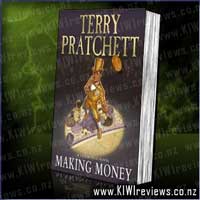 Disclosure StatementFULL DISCLOSURE: A number of units of this product have, at some time, been supplied to KIWIreviews by Penguin Random House or their agents for the purposes of unbiased, independent reviews. No fee was accepted by KIWIreviews or the reviewers themselves - these are genuine, unpaid consumer reviews.
Available:
October 2007

Who would not wish to be the man in charge of Ankh-Morpork's Royal Mint and the bank next door? It's a job for life. But, as former conman and current Postmaster Moist von Lipwig is learning, life is not necessarily for long.

The Chief Cashier is almost certainly a vampire. There's something nameless in the cellar (and the cellar itself is pretty nameless), and it turns out that the Royal Mint runs at a loss. A three-hundred-year-old dead wizard is after his girlfriend, he's about to be exposed as a fraud, but the Assassins' Guild might get him first. In fact, a lot of people want him dead.

Oh, and every day he has to take the Chainman of the Board for walkies...

Everywhere he looks he's making enemies... what he should be doing is Making Money!

As with all of Terry Pratchett's Discworld books, I found this latest offering to be a brilliant story, full of subtle wit and jibes at today's world, some neat plot twists, and some outright funny jokes... and as much as I hate to even risk down-playing such an elegant tale, it's yet another Pratchett gem.

I really love it when TP continues along with key characters (in both senses of the word), because it gives a sense of continuity to the stories... the dedicated reader doesn't have to devote time to learning a new character, and can instead focus on the story itself. Certain characters always seem to make an appearance, such as the Patrician, titular ruler of the city and scarily efficient thinker, and a wizard or two, and more often of late, an Igor... but it's great to see key players popping up as lead actors in the tales.

Because Moist's girlfriend, Spike, works for the free Golems, it wasn't a big surprise to find some neat Golem action thrown in... but I have to say it felt very 'last minute'... not as smoothly integrated as most of TP's plots go... a little worrying, and a little disjointed in places, but the rest of the story was so enjoyable I found it easy to put that niggle aside and get stuck into the rest. I found the Royal Mint and the Glooper to both be excellent plot devices... and I suspect the Glooper could really have been used to much better effect...

Overall... not too bad at all. Not my favourite TP tale, but certainly an excellent read and a must-have for any discworld devotee.

The Monster at the End of This Book: Starring Lovable, Furry Old Grover, is a post-modern children's picture book based on the television series Sesame Street