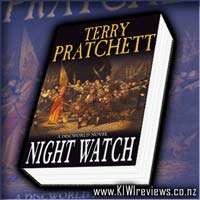 Disclosure StatementFULL DISCLOSURE: A number of units of this product have, at some time, been supplied to KIWIreviews by Penguin Random House or their agents for the purposes of unbiased, independent reviews. No fee was accepted by KIWIreviews or the reviewers themselves - these are genuine, unpaid consumer reviews.
Available:
October 2004

Commander Sam Vimes of the Ankh Morpork City Watch had it all. But now he's back in his own rough, tough past without even the clothes he was standing up in when the lightning struck.

Living in the past is hard. Dying in the past is incredibly easy. But he must survive, because he has a job to do. He must track down a murderer, teach his younger self how to be a good copper and change the outcome of a bloody rebellion. There's a problem: if he wins, he's got no wife, no child, no future.

A Discworld Tale of One City, with a full chorus of street urchins, ladies of negotiable affection, rebels, secret policemen and other children of the revolution.

I have always enjoyed a tale, whether it be presented as a movie, book or verbal tale, that involved temporal paradoxes, or time-twisters. Can you go back and kill your own ancestor, or would that mean that none of your family from that point on would have been created, thus meaning you didn't exist to go back and kill him/her? Can you stand on a butterfly in the past and return to a future that was radically different? Who knows, there are plenty of theories but (as far as I know) no evidence either way.

Terry Pratchett has the wonderful gift of taking the impossible, gently folding in some subtle humour (I Love Lu-Tze), and putting out a witty but thought-provoking tale of madness and mayhem on a fictional (?!) world that floats through space propped on the backs of four giant elephants, which in turn ride upon the top shell of a great galactic turtle, the Great A'tuin.

This tale however contained the more gory details than any other Discworld novel I have ever read (And I have read them all.) Not even Monstrous Regiment had this level of battle-realism.

This tale takes us back to the most recent civil war in Anhk-Morepork, where His Grace, Lord Samuel Vimes learned Guardcraft in his youth at the hands, and feet, of Segeant-at-Arms Keel... or did he? With some brilliant twists and turns, a few predictable turns, and more than a few unexpected spin-off effects, Pratchett shows us that "...the universe finds a way..." often despite our best efforts to change our fate.

Overall, I found this one to be a little disturbing in places, as it is by far the LEAST kid-friendly book. I have sometime read some of the Discworld books to my son, but this is one he can read himself once he reaches a suitable age. It's still brilliantly witty, cleverly crafted and another shining example of Terry's literary mastership, however I feel it should carry a PGR rating sticker on some chapters.

Evil Doctor Evil MacEvilness has created a magnet so powerful it can attract anything. Now he's using it to steal whatever he wants. To stop him, Secret Agent Derek Danger Dale must go undercover and apply for the job as one of MacEvilness's own goons.

But can Derek REALLY fool the evil doctor? And can he REALLY survive his close encounters with Petunia the Giant Piranha and the Notoriously Nasty, but Nevertheless Nifty, Ninjas?