« Rants in the Dark - From One Tired Mama to Another review

The Fate of the Furious review 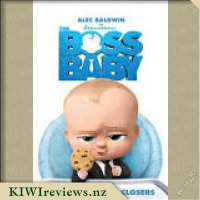 Dream Works Animation presents the fun-filled, feel good comedy of the year, The Boss Baby! Seven-year-old Tim Templeton suddenly finds his share of parental love plummeting when his new baby brother (Alec Baldwin) arrives - wearing a suit and toting a briefcase - and makes it clear to everyone that he's in charge.

But when Tim discovers that Boss Baby is on a secret mission, he reluctantly agrees to team up with his pint-sized sibling for an epic adventure that might just change the world!

I wasn't very interested in seeing this film at all but with three children who were all eager to see it, well, I was rather outvoted and so off we went to see it. When it finished, all three of my kids declared that they had really enjoyed it whilst I could quite happily go the rest of my days without seeing it again. The basic premise is of a young boy who is very happy in his life as an only child when along comes a new baby (they do briefly show the mother pregnant, but obviously they don't prep him for its arrival and then things loose their line of normalcy). Our young boy is naturally upset and put off by this intrusion and then discovers that his new baby brother isn't like all the other baby's and that things are going to go even more haywire.

We follow Tim and his baby brother as they begrudgingly work together to stop the launch of the 'puppy that will never grow old' because Baby Corp doesn't want people to stop having babies. What happens is pretty much what you would expect, some fighting, action, chase scene, moments that defy logic (at least that is explained by Tim saying it is the way that he remembers things happening) and of course a heart warming ending. While I know that movies don't have to follow any sort of logic, this film just lacked too much and the characters didn't even get me engaged or hoping for a happy ending. The film itself has proven popular enough for a TV series to launch but it isn't my cup of tea.

The great thing about kid movies is they don't need to make sense and any form of reality really can get thrown out of the window as long as the characters are cute, a couple of laughs are thrown in and big names are associated with the movie. As long as the ending leaves you feeling good everything else is trivial.

In a way it would be nice if life was like this, you ring up, place an order and in a couple of days a new born baby comes walking up your driveway. No nine months of hardly any sleep, no labour, no fat tummy and no constantly going to the toilet every five seconds. You still get the sleepless nights having to do night feeds but everything else seems to be a piece of cake. The parents are happy and everything seems so easy. Not once did the parents ask why does my new born carry a brief case and wear a suit instead they say how cute it is.

If you can get passed all of the issues with this movie, like how he talks, walks but yet still demands a bottle it is not a bad movie, its not a fantastic movie but it is watchable. The girls loved it and have both said they want to watch it again but as yet they have not asked to see it again, I suggested it last night and both said no. My husband has been holding out for so long to see it and as he went out on Sunday he made us promise him we would not put it on till he returned. In the end he was not overly impressed where as I wasn't fazed by it. Basically its a movie about babies vrs puppies. It is predictable and has the lovey dovey ending with not much substance to it.

I am not a huge Toby Maguire fan so his talk over was really annoying for me. It is also told by the views of a seven year old so you are not entirely sure what you are suppose to believe. He constantly reminds you this is 'what he remembers' so it is completely up to the viewer how much they get out of it. I did like the meeting with the other babies but the maturity level of them all differs so it leaves you wandering how he is so advanced where as the rest not so much. It is explained loosely but then as with these sorts of movies it goes over my head.

Where as a cute movie not one I think will be watched that often by the family. It was enjoyable but it just did not push all the right buttons for me. I think I might of nodded off for a couple of seconds but I don't think I missed anything as not a heavy plot line.

So meet Napoleon Dynamite, whom you might have seen muttering 'Go-osh' and 'Idiot' in the halls. You probably recognise his tight red afro, his moon-boots and hammer-pants and his mean game of one-man tether ball.

But there's far more to Napoleon than the laid back nerd you've watched lecture about Loch Ness and get slammed into lockers. Because somehow this oddball managed to turn our school upside down and make the wildest dreams of his friends come true.