ProdID: 2126 - Journey to the Centre of the Earth
Directed by Eric Brevig 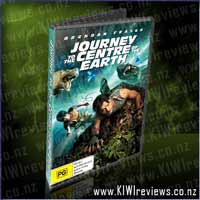 Journey to the Centre of the Earth product reviews

Based on the Jules Verne classic.

On a hunch, trying to track down his lost brother, Trevor Anderson, his nephew and their tour guide make a breakthrough discovery that launches them on a thrilling journey into the unknown.

On a scramble to find their way back, the group travels through a never-before-seen world, encountering creatures and objects never imagined or thought long-extinct.

Fraser plays Trevor Anderson, a man is trying to find out what happened to his brother and ends up babysitting his nephew, who he takes along with him as they try to figure out what happened to him. Before they know it, Trevor, along with his nephew and their tour guide end up stuck in the middle of the Earth and have to try and figure out how they can return home before the area they are in floods with lava and boils them all to death.

There is a tonne of special effects required in this movie, ranging from dinosaurs, to lava, to ridiculously long falls and somehow surviving a trip down the side of a volcano. Whilst a lot of what happens is something you know wouldn't happen in real life, the special effects make it seem real and some of the scenery is quite lovely, so it was all done rather well in the end.

This is a fun, family movie and one that I rather enjoyed.

I am usually quite hesitant when I find a movie with Brendon Fraser. I have found his roles in the 'Mummy' movies were adequate, but overall he is a little to over-engaged and enthusiastic to really be taken seriously. He is like the hyperactive child of the action heroes.

But this movie seemed to work quite well. the "scientific" ideas seem rather over-the-top, but they film remains interesting regardless. Whether or not there is any validity to his explanations throughout the movie, it is rather irrelevant. It still creates a sense of wonder in science, and reminds me of the passion that I have had for learning new and interesting tidbits of information.

It is a fun plot, that looks at the idea of there being a separate, isolated world of lost plants and animals, situated within the core of our own planet. It is an interesting watch, because it is something that is hard to disprove, beyond finding a way to drill through the earth and physically see it yourself.

But as I said earlier, despite the questionable "science", it is a great family film, that I would gladly watch again. Lo and behold! Brendon manages to pull it off!

I have been a great fan of Brendan Fraser since I first saw him in 'School Ties'... since those moody days he has grown as an actor and become quite the 'action hero' with his successes in the "Mummy" franchise and now in this movie.

Having also read the original Jules Verne classic, it was interesting to see that this was *not* an attempt to convert the book into a movie, which made it a lot easier to accept on it's own merits, rather than as a vague distant-cousin of a classic piece of fiction.

Knowing very little about geology and vulcanology, I can't speak as to the accuracy of some of the premises put forth in this movie... such as volcanic tubes that extend for hundreds of miles into the earth's mantle, or how diamonds, rubies, emeralds and other precious gems can all form in the same location, or even whether pockets can form below the crust that allow life without massive pressure-containment systems... but that's not the point of this movie. The movie itself is about throwing today's overly-scientific, rational mindset out the window to fend for itself for a few hours while you allow the wonder-filled child inside you to become immersed in the magic, the possibility, of a living ecosystem buried beneath our feet.

Great to see young Josh Hutcherson back again... after a short but highlight-filled career so far, it will be interesting to see if he progresses across a broad expanse of roles, or if he's doomed to be typecast until he's too old to be 'that moody/bratty kid' any more.

I loved the Special Edition 2-disc set... having the standard cinematic release to watch was great, but also having the 3d version was just stunning. To add the cherry on top, included in the case is two sets of 3d glasses. What more could you want? Well, you got it... bonus features and extras coming out the wazzoo on both discs!

Overall, a most excellent way to pass a miserable afternoon of overcast and drizzle, everyone snuggled up together on the couch wrapped in a couple of minkie blankets and duvets, with a hot milo to keep the fingers from freezing on the remote. Just great!

Five friends who share a loft for their extramarital affairs begin to question one another after the body of an unknown woman is found in the property.