ProdID: 7696 - Rants in the Dark - From One Tired Mama to Another
Written by Emily Writes 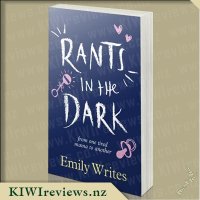 With two small boys, both non-sleepers, Emily finds herself awake in the wee small hours night after night. Her writing is often done then, and she offers her own often hilarious and always heart-warming experiences to other exhausted parents. She describes the frustrations as well as the tender moments of real parenting, as opposed to what you thought it was going to be like, or what well-meaning advice-givers tell you it should be like.

A must-have for all new parents and parents-to-be.

Emily's blogs have been wildly popular, as have her on-line columns with New Zealand Woman's Weekly and The New Zealand Herald.

Growing up I had always thought that I wouldn't have children, I would just look after friends children. I had always been good with children and constantly looked after the neighbors children. As I got older though friends started getting married and starting families. When I met my partner he never seemed keen on having children, but after 4 years together we welcomed our first child into the world. Watching television shows I saw all these mothers that seemed like they were perfect and had it all, being able to work, and keep a tidy house with children and made it look effortless. I always felt like I didn't have it together enough but then I heard about "Rants in the Dark" through a coffee group, and the mothers were raving about it. I decided to borrow it from the library to see what all the fuss was about.

When I got the book I wasn't sure what to expect. The cover stands out with the dark colour and contrasting white words of the title, and the pink illustrations of hearts, a pacifier and a rattle. The cover says "from one tired mama to another" this really appealed to me, I am constantly woken at least twice a night by my youngest wanting a feed. I started reading this book and was instantly captivated by it. It was like this woman from Wellington who had written this book was reading my mind about some of my feelings about motherhood. This book covers all parts of motherhood - from the pregnancy to the birth and beyond. I found this book really easy to relate to as the author has experienced it, and she says it how it is, no sugar coating anything. At times this book had me laughing, but at times I was also near tears with just how honest the author was. Being written by a New Zealand author was an added bonus.

I am now an avid follower of Emily's blog and I hope that she will be releasing another book. I highly recommend this book to anyone who is expecting a child, has a child or children, or anyone in general for an honest and insightful look at motherhood. Since reading this book from the library I have gone and purchased my own copy.