Home > Categories > Movies > Action > The Fate of the Furious review

ProdID: 7698 - The Fate of the Furious
Directed by F Gary Gray 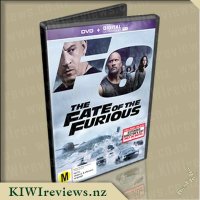 The Fate of the Furious product reviews

But when a mysterious woman (Oscar winner Charlize Theron) seduces Dom into the world of crime he can't seem to escape and a betrayal of those closest to him, they will face trials that will test them as never before.

From the shores of Cuba and the streets of New York City to the icy plains off the arctic Barents Sea, our elite force will crisscross the globe to stop an anarchist from unleashing chaos on the worlds stage.... and to bring home the man who made them a family.

I was lucky enough to win a DVD copy of the Fate of the Furious from KIWIreviews and was keen to see whether there was any mileage left in this, the 8th movie in the series. I had watched the first few films and enjoyed the fast cars and racing but as the storylines got more and more far-fetched, I missed a few of the later films. I was also keen to see the newer characters and how they had dealt with the loss of Paul Walker.

The story started off well and featured Cuba - home of many amazing old cars. Knowing the kind of fast action and effects I decided not to worry too much about the believability of some of the initial scenes but to just sit back and enjoy the film...and I did. Yes, there are some over-the-top action scenes but there is a storyline too, unlike many films which replace storylines with special effects.

Vin Diesel was back with his idea of family being tested. Charlize Theron played a cyber-terrorist (sporting the same hair as Sway in Gone in 60 Seconds) and no doubt the high-tech plot will appeal to the younger digital generation. Dwayne "The Rock" Johnson featured in a couple of good scenes - leading a Haka and a prison fight with Jason Statham. My favourite scene featured tough guy Jason Statham and a baby which I found really funny. The new cast work well together but there was a nice touch and nod to Paul Walker aka Brian.

Fate of the Furious features a feast of fabulous cars to please the real petrol heads (some of which literally rain down on New York) with a mad car chase across the ice too. Altogether an entertaining action-packed feature ideal for watching on a DVD night in.

Immediately when I saw The fate of the furious available for review I quickly put my request in and kept my fingers (and toes) crossed! Having watched and loved the previous seven movies in the fast and furious series, this movie (number eight in the series) was also a definite on my must see list. I'm not a massive movie or DVD watcher so if something makes it onto my must see list that's viewed as a massive compliment in itself in our household.

Each and every movie in this series I've always wondered and said aloud "surely this one isn't going to be any good, they've been amazing so far (compared to most who loose it at the sequel), surely they won't manage another one". I was definitely interested to see whether this movie, number eight would be the final one, the one that was no good. However yet again I was proven wrong (in a great way)! What an utter tribute to every last person who is involved in The fate of the furious - from director to actors to writers and film makers it is an utter accomplishment in itself to make it to the eighth movie. It is even more of an utter accomplishment when that eighth movie is just as amazingly great as the first and is captivating audiences in such a magnificent way.

When this movie starts, Dom and Letty are on their honeymoon in Havana but it isn't long before the scenes change to New York and then lastly it ends in Russia. A captivating storyline to say the least! This movie is a little different to the previous in the series in that suddenly the team that has always been together is now fighting against their leader and be all: Dom. However Letty knows Dom better than them all and defends his name right to the end, knowing that there is a bigger drive behind Dom's actions. When all is revealed, its easy to accept why he made the choices he did. As this movie ended I could see the possibility of future movies and already I want to know the future of Brian! (You'll have to watch the movie to understand what I truly mean here).

Speaking of Brian, this is the first movie in the series that doesn't feature Paul Walker (as Brian) after his tragic death, and although I definitely thought of him and missed the character as such, the movie was still just as great. Without a doubt I highly recommend that you go out and buy this DVD today so you can enjoy this movie; full of speed, thrills and action. I love that it has all of this yet it still has a story, in part - a love story that in essence celebrates the realness of family. If you love the others in the series and this is your type of movie, you won't at all be disappointed!