« Can You Ever Forgive Me? review 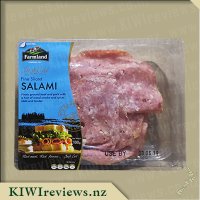 Disclosure StatementFULL DISCLOSURE: A number of units of this product have, at some time, been supplied to KIWIreviews by Farmland Foods or their agents for the purposes of unbiased, independent reviews. No fee was accepted by KIWIreviews or the reviewers themselves - these are genuine, unpaid consumer reviews.
Available:
at supermarkets nationwide

Finely ground beef and pork with a hint of wood smoke and spice. Mild and tender.

Salami isn't a meat that I have really had before. Or perhaps I have. The texture is reminiscent of luncheon, which I did have from time to time in my childhood. But whether luncheon is actually it's own defined style of deli meat I don't really know. What I know for sure is that salami is the most unique of the whole deli meat range, being mostly composed of not just meat, but also fat being a specific major ingredient. This product has an average weighting of 75% beef meat and 15% pork fat, which creates an interesting comingling of different land beasts.

What generally occurs with salami is that the fat is minced, then the lean meat is minced, and it is all mixed together with a selection of spiced. This gives the ending result its signature pock-marked appearance. Salami is uniquely fermented (to break down the sugars) and then air-dried, which creates a thick and almost pasty texture to it, due to the low water content.

This thinly sliced deli meat has a very mellow, but wide-ranging flavour. A flavour that fills the mouth, that you can taste all over the tongue, but isn't overbearing for any part of it. Nothing overly standout about it, but the texture is quite nice and feels very filling when you consume it. Great for a quick and easy sandwich, combining with cheese on crackers, or even with some gravy and roasted vegetables for a full dinner.

The product doesn't come in the roll form, it comes thinly pre-sliced in a thick plastic tray, but it is airtight, to prevent it from drying out too much. The tray is much larger than it needs to be (twice the size at least), so it would be nice to see the company taking a bit more care to reduce their environmental impact), but with the plastic sheet on top, it is very easy to conduct your own quality checks on the product before purchasing, thanks to the transparent window on top.

We always have shaved meats in the fridge, they're nice and handy for a quick addition to any meal, with ham and salami being the main staples. I like a good, garlicky salami, my daughters enjoy salami and my son doesn't like salami at all, but all three were happy to have a piece for me. The first thing we noticed was that these are big slices, big enough for me to feel like one would be plenty on a sandwich and look like you have a decent amount to enjoy. What I don't like is how fatty salami is and looks, but with the right flavour I can get past that.

Opening it up it had a nice smell but not particularly strong, so it didn't really grab my stomachs attention. My eight year old gave it a try and said it was delicious and it was a nice sized piece. My nine year old, who is the biggest salami lover in the house gleefully took a big bite and then spat it out, to her it tasted more like ham, which she hates and so she never wants it again. My eleven year old hates salami but agreed to try this for me, he promptly gobbled it down and said that if I buy this brand in the future, he will happily eat it. My eight year old then paired her salami with bread, olives and gherkins and said she'd like to finish the pack on her own. I didn't like this at all, for me the flavours were too subtle and I could taste the fat more than anything else.

With two out of four of us liking this, I may get it again.

My family and I go through a lot of different sandwich meats - it's something we buy each week when doing groceries, and when it comes to the variety we buy salami is near the top of the pick with it finding it's way to our supermarket trolley at least once a fortnight. The Farmland's brand is one which I have recently spotted at my local supermarket, though I hadn't yet tried it as sometimes it's hard to go past your favourite brand, so getting this for review provided me with the perfect opportunity to try it out.

The packaging itself was attractive and easy to open, I loved being able to clearly see the contents within through the clear plastic tray and the beautiful blue label to one side made this product really stand out, it was a basic label which states exactly what you are getting from the product and I loved the addition on the image which was very visually appealing and showed a very scrumptious looking sandwich which contained the salami itself.

The salami is classed as thin-cut and I was intrigued as to how salami could possibly be sliced thinner than it usually as, but Farmlands did really slice it thinner than most salami's! The back of the pack says it contains 250gram serves, but as soon as I opened the pack I knew it was going to do my family more than 2 meals as the amount of meat was very generous. The salami had a lovely aroma, just like any good salami should and the herbs and spices drifting from the pack smelt delectable.

For my first use of the salami, I decided to make my partner and I each a sandwich, partnering the salami with some sliced tomatoes, lettuce, cheese, and mayonnaise. The flavour combination was perfect and even through the other ingredients you could certainly taste that of the salami, I loved that the salami was nice and mild without a huge kick of heat, my partner even commented on how nice it was and has already asked me to buy it again. Wanting to explore the salami further (before it was all eaten directly from the pack) I decided to whip up some cheese and salami puffs, a very quick but super tasty recipe to make. I diced up the remaining salami and added it to my cheese puff mix, once cooked and cooled slightly my family each sampled one, I knew they would be a hit with my partner and myself but was curious as to how Miss 6 would respond with the addition of salami. Straight away it was noticed and refused but with lots of persuasion, she gave them a try and said she loved them with salami in.

I must say this product has won me own, super tasty, generous portions and all at a great price. A brand worth keeping an eye out for and purchasing at your local shops. 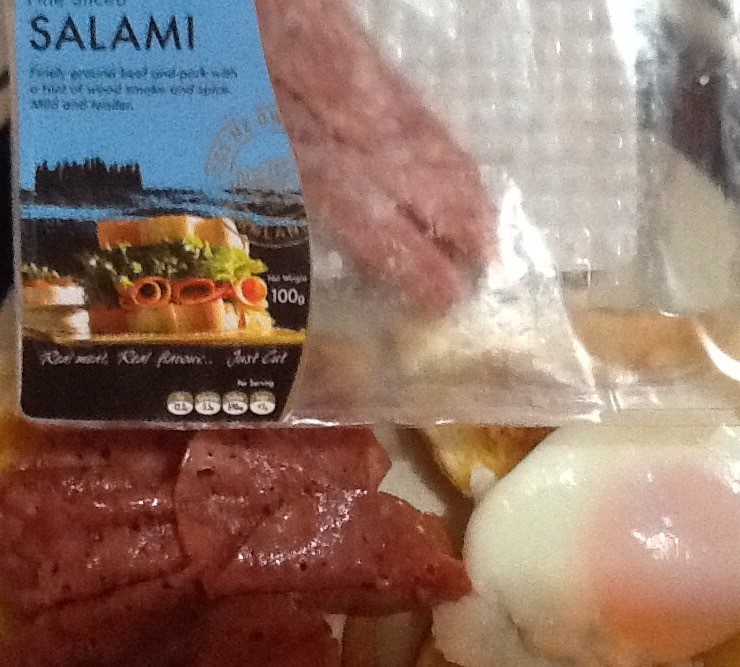 When I first opened the packet, I was greeted with the lovely rich smell of freshly cut salami; the packaging had done its job maintaining the contents in their just-sliced state, which made me wonder what is going to happen in the future when plastic eventually gets phased out. I hope the replacement will do just as good a job of presentation and storage. As for the quantity, there seemed to be many more slices than I had expected - and although they are thin slices. the flavour means that they need to be eaten slowly for best effect.

With milder salamis like this one, I like to eat them at room temperature or slightly above. That brings out the meaty flavour and enhances the smoky effect. I served some slices on top of poached eggs on toast. When the eggs were just cooked, I put the salami on top as I moved them on to the plate. The heat of the eggs transferred itself to the salami so that it was warmed up; some of the little fat globules in the meat melted down into the egg and shared the flavour so that the entire dish was infused with a gentle spiciness. It made a great substitute for bacon!

The packet said it contained two 50g servings, but I thought it would be sufficient for at least three. I made some of it into open sandwiches with sliced tomato and a sprinkling of parsley. There was no other seasoning needed as the salami was tasty enough on its own. The tomato minimised the fatty aftertaste of the salami, transforming it into a delicious treat. I served this with mugs of French onion soup - in combination, a great lunchtime treat for two of us.

There were still three slices left so I chopped them into small pieces and used them to decorate a plain macaroni cheese. Although it was not a huge amount, it was enough to add interest and a flavour boost. This dish can be quite boring on its own, especially when a milder cheese like Edam has been used, so the addition of some spiced meats or nuts can make a huge difference. The salami is so versatile that I am going to get some more because I can think of many more ways of using it.

Pricewise it is competitive considering the number of uses I got from just one pack. I had it on my own the first time round (with the poached eggs) but on the other two occasions there were two of us sharing the meal, so altogether it fed five! Not too bad for a pack that was meant to feed two.

If you're reading this, you care about the crunch in your peanut butter. We understand. At Nut Brothers, we're madly in love with this stuff.

It's why we get our Hi-Oleic peanuts all the way from South America. It's why we roast them here in New Zealand. It's why our grindstones are set to the exact millimetre. That's how we ensure a texture that's satisfying to spread and sumptuous to eat; all the ... more...