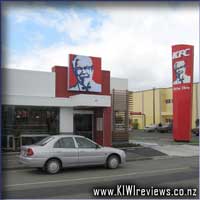 Admin Note: This was all the information available

Princess Street is the closest KFC to us so therefore the one we use unfortunately it is rarely a pleasure and our order is very rarely correct or all there!

On our most recent visit the girl had got the two buns I had ordered out of the warmer and placed them on the ordering counter which was by no means clean while she located the bags to put them in, when I asked for fresh buns that had not been sitting on the counter for the best part of five minutes she proceeded to tell me the counters were sanitized after every customer to which I had a giggle and told her I had been in line for at least 20 minutes and had not seen this happen once. She replaced the buns and returned with an attitude, I had my order practically thrown at me, Rude to say the least.

Although not all my encounters have been bad they regularly forget at least one item and do tend to take a long time. Not Fast Food as expected. If I didn't have such a KFC Addict in my hubby I don't think I would return here. We have been lucky in that our order has never been cold, so I guess you could say we are lucky in that respect! The Drive Thru is also in a ridiculous place that blocks cars that have parked if they are busy.

Definitely not the best place to eat!

So the family and I were deciding what we would have for dinner, and we eventually decided KFC. So I decided to go online and find a good deal, found a voucher for a Family Feast for $26.90 on their website, this is great value, when the original price is $34.90, that's a saving of $8. So we decided to go through the drive thru, this was a mistake in itself. We got to the drive thru window and I gave the Staff Member the voucher, she went to type in the voucher code and it didn't work. So she then said that I could not have that deal and tried to sell me another deal. I kept telling her that I got it from their site just moments before, and the expiry on the voucher was 4 days from now, she was not listening to me. So instead of arguing with the staff member, I asked for the manager, the manager processed the voucher without any problems, maybe some training is in order.

So we got our order and left, once we got home, we opened up the bucket of chicken to find not 1 piece of breast, mainly got drumsticks and wings. This is not the first time it has happened either, and also found that the chips did not have any seasoning on it at all. So what we thought was a good bargain, turned out to be, a waste of my time and money. I have complained before to KFC with no response, so decided not to this time. I have to say the layout of the drive through is good, but it runs straight through the car park. Which if the drive through was full, no parked cars can get out. The place looks upmarket and stylish, Great location as I live in the Kelvin Grove area.

I have never had a problem foodwise or servicewise with this KFC or the Rangitikei Street KFC before.

Unfortunately, the new drive through layout within the Princess Street KFC I have found is much worse than the old layout! We saw just how bad it was one busy Saturday night. Cars were queing right around the drive through, back to the entrance. This blocked anyone from entering or anyone that was parked and had gone into the restaurant from leaving. It was madness! We turned around and went to the Rangetikei St restaurant.

Service is, somehow, also a lot slower with the new window (no speaker box, you get to talk to a real person).

Food has always been great - always hot and we always get exactly what we order.

Well, new store, new staff, new uniform... not much new in the way of improvements of service, sorry to say.

My family and I decided to give the new place a try out. Simple order; 1 kids bucket with popcorn chicken, 2 extreme regular-works burger meals. Had to admit, for the $2 extra, getting a small spud'n'gravy or coleslaw plus a piece of chook thrown in was a good deal. At least, it would have been...

By the time the whole order had been assembled, the burgers and chips were cold. They forgot my extra piece of chicken in the fluster of having to swap out the spud'n'gravy he grabbed for the coleslaw I ordered. It took me nearly six minutes of waiting quietly at the side of the counter to attract the manager's attention, and when I asked him to explain how these -insert action of me shoving the burgers across the counter- could be called works burgers, his reaction was shocked, to say the least... they were chicken burgers without any chicken!

We got the burgers replaced, we flagged the chips (while I watched, they salted them in the draining tray, and then AGAIN once dished into the boxes! I like salt on my chips, not a few chips with my box of salt, thanks!) and basically we walked out with the solid knowledge that nothing had really changed, except that they now had less appealing seating, had stuck a giant plasma TV on the wall displaying the 'Juice' channel, complete with near-pornographic music videos playing into kids rapt faces, and more cheerful but less competent staff now.

Overall, the best bit of the entire meal was sitting around with other diners comparing notes on how the place was still crap, and laughing at the antics going on as the manager cycled through all the counter staff berating them for their ineptitude, sentencing them to cleaning duty, wherein they entertained us with their attempts to empty rubbish bins into bags, but instead aimed for the floor. (Hey guys, here's a little hint... why not put the bags into the EMPTY bins, and let the bags fill up... it's called "Lining the bins" and it will save you HOURS of mopping crusty shake goo and chicken grease off your nice new shiny floor.)

I have only visited this store once. That was more than enough!!! Dirty tables, filthy floor, extremely slow service. The person that served me looked like she hated her job, her uniform was filthy. i understand that u get a bit grubby but hey, u are serving food!!! Chicken was dry, was no coleslaw in stock and im not gonna waste my time going back!!! Sorry

I have to tell you about a recent experience I have had with in KFC Palmerston North. I was after some chicken like any red-blooded kiwi, to find the only choice available KFC. On arrival there was ample parking but to be honest the place had an appeal of that of a third world hut where dead meat was sold in the blazing heat of the day. Still I entered, what can I say, I was dying for some chicken. Walking through the store I found the KFC that we all come to know, you know the dirty tables, the grease encrusted floor that appears not to have been swept in hours. Finally reaching the counter you would think things get better only to find that the person handling the cash is also making your food just this alone cause some hairs to raise or as in my case my lunch to come up.
A point on service, don't expect it. While I was waiting for my food I had a look at the line that was growing ever longer after about 4 min I was somewhat satisfied that about 5 customers walked, out no doubt going to a burger barn that is just around the corner where the service is not bad I might add.
Finally getting the food was ok it was warm and some what tasty or rather it is the maximum amount of tastiness that you can expect form a fast food outlet.

But as a manager I suppose the thing that frustrates me the most is that all of this can be prevented and to top it off it has been done, just look at our beloved MacDonald's clean, tidy and food in a reasonable time. It makes you wonder if the CEO of KFC has ever heard of scientific management. Please take the time to pickup a first year management book you'll triple your business.