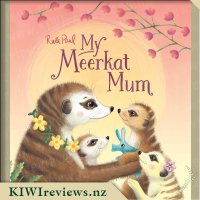 Up. Down. Dig. Play.
Meerkat Mum leads the way.

Snuggle up, little pup,
Join them in a meerkat day!

A beautifully produced book for teaching little ones about directions.

Another fantastic book by Scholastic. Miss 4.5 was thrilled to open our review package and find this book. She is a keen reader (well tries her hardest) and absolutely loves having a book or five read to her before bedtime. She picked up this book and immediately recognised that it had "mum" in the title. She then went on to inform me that the book must be about an animal and her children as there were one, two, three 'kids' on the front.

This whole book was clear and easy to read the entire way through and the pictures told the story. I loved how this book talked about different directions such as left, right, up and down. When it mentioned these directions the meerkats were also posed in these directions. Miss 4.5 loved this as she could recognise the word left and then knew what direction left was by looking at the pictures and was able to copy and link the two together.

The pictures were beautiful and clear cut. I loved how simple and uncluttered the pages were with pictures and how the pictures did really tell the story.

I would recommend this book to others and I would definitely purchase it to give as a gift. The price of $18.99 in my eyes is totally reasonable and very well worth it for such a great book. Thanks scholastic. Mr Five and Mr Three absolutely love meerkats, so they were excited to find that I had this book to share with them. I had thought it would be a bit young for Mr Five, but I was wrong. He is just learning to read so he was able to make out some of the words and read them to me. I was impressed and told him as much, and he glowed!

Mr Three, on the other hand, was mesmerised by the pictures. Although they are drawings, they are sufficiently true to life for him to be able to understand that they were the same as the real animals he had seen on TV. We went through the actions on each page, yawning and stretching and hissing. I did not join in the jumping and disappearing under the table to shelter from the rain as I had a recent leg injury, but no matter - Mr Five led the way and Mr Three followed with gusto.

When Mr Five reached the page that said "Mum is grumpy" he thought it was very funny. He had been able to read the first two words but needed help with "grumpy". When he repeated the sentence and understood what it was saying, there was a lightbulb moment when I could see him relating it to his own experience. Then he announced "Mums are often grumpy!" and he and Mr Three gave each other a high five while I tried not to laugh.

They loved the part where the meerkat pups snuggle up to sleep. When the boys visit they sometimes share a bed and cuddle up together, and they have a couple of teddies that travel with them. Mr Three liked the blue soft toy that one of the little meerkats carried round in his mouth and took to bed with him, and asked if it was his teddy. Mr Five said it could not be a teddy because teddies are never blue! (I did not have the heart to challenge that.)

I like the format of the book. It has a strong hardback cover which will mean it lasts longer with two energetic children, and the pictures are beautifully drawn with desert landscapes and giraffes in the background to give children a sense of the meerkat's natural habitat. Other animals, such as snakes and aardvarks, also feature. The muted shades of the burrow contrast strongly with the almost blinding brightness of the open desert as the meerkats progress through their exciting day before falling wearily into bed.

Both boys gave it an enthusiastic thumbs-up, and were overjoyed when I said they could take it back home with them. They piled into their car seats without needing any persuasion. Mr Five was already re-reading it to his brother, and when he reached a word he did not know, he just guessed!

After being enrolled in the Song Festival, Geronimo Stilton's song, "Welcome to New Mouse City," goes to the top of the charts and makes Geronimo a star, but very few CDs are sold after the festival. Will Geronimo and his detective friend, Hercule Poirat, be able to solve the mystery?