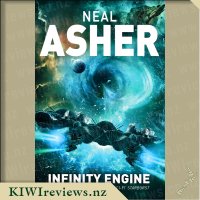 Disclosure StatementFULL DISCLOSURE: A number of units of this product have, at some time, been supplied to KIWIreviews by Macmillan Publishers Ltd or their agents for the purposes of unbiased, independent reviews. No fee was accepted by KIWIreviews or the reviewers themselves - these are genuine, unpaid consumer reviews.
Available:
March 2017

A man battles for his life, two AIs vie for supremacy and a civilization hangs in the balance... Several forces now pursue rogue artificial intelligence Penny Royal, hungry for revenge or redemption, and the Brockle is the most dangerous of all. This criminal swarm-robot AI has escaped its confinement and is upgrading itself, becoming ever more powerful in anticipation of a deadly showdown. Events also escalate aboard the damaged war factory station where Penny Royal was constructed.

Here Thorvald Spear, alien prador, and an assassin drone struggle to stay alive, battling insane AIs and technology gone wild. Then the Weaver arrives - last of the Atheter, resurrected from a race that suicided two million years ago. But what could it contribute to Penny Royal's tortuous plans? And beyond the war factory a black hole conceals a tantalizing secret which could destroy the Polity. As AIs, humans and prador clash at its boundary, will anything survive their explosive final confrontation?

As the concluding title in a trilogy, the third book is perhaps the most important to get "spot on" - it's the bow that ties up all the loose threads and wraps up the story for the readers... so when an author botches it, it is a spectacular mess indeed, causing disappointment and frustration for those who went out and spent hard-earned money on something that *might* get them a couple of dollars at the 2nd hand bookstore if they are lucky.

This is a Neal Asher title, and it's part of the inspired Transformation trilogy. You got nothing to worry about, this baby is a stunner!

While the action is a little more sporadic and consolidated into discrete chunks in this story, it is no less for that. Taking up the slack is drama, intrigue, red herrings galore, neat twists and the dastardly goings-on of that nasty piece of work "The Brockle" in his Quixotic quest to destroy Penny Royal by beating 'him' at his own game - that is to say, going from multiplex to megaplex and ramping up his own individual component units to a degree that would be nigh-on suicidal for anything less insane than it already is.

I was particularly impressed by Neal's addressing of the consequences of Sverl's transformation with the flow-on effects in his first-children, how they were adapting to the new paradigm, and how Sverl himself was adjusting to the new mindset he was forced to adopt. Looking also at the potential and consequences for The Weaver, and Thorvald Spear, giving rise to some great story content, also gave the story itself a lot of extra depth and texture which made it gripping reading whether something was being destroyed or not. I was also impressed by the revelation that explained how Penny Royal could be everywhere he needed to be, when he needed to be there, and always seemed able to intervene at exactly the right moment. Omniscient and omnipotent is a heady combination.

What REALLY blew me away though was how it all tied up across the three books. We got to see a tiny glimpse of the universe as Penny Royal saw it - something unlike anything a mere human brain could perceive... and yet somehow Neal dreamed up this universe in all it's multi-dimensional glory and abstracted it down into something we could grasp. The man's a mental oddity in the very best of ways, to pull this off. I see myself as no slouch in the amateur higher-sciences arena, but man... the stuff Asher has pulled together to fuel this universe of his leaves my brain leaking out of my ears at times.

I particularly note that Neal's "ending" for Penny Royal, and to a lesser degree The Brockle, is simply inspired. If the theory espoused in this book is true, then somewhere in the future is the key to the creation of the universe as we know it... and one should always be cautious about creating one's own God.

Overall, this is perhaps the best story I have read yet from Asher, and to know that there is a new trilogy already in progress fills me with a delight no words can adequately describe... but if you imagine a kid sitting in the car on a long road trip, jiggling in anticipation eagerly awaiting the destination knowing that is holds wonders and entertainments galore... you get a small glimpse at the edge of the shadow of my current mindset.

Amisfield has become an icon in Queenstown after 25 years in the wine business and a decade of running a popular bistro. With an emphasis on local and seasonal ingredients, their tasty food is enjoyed in fabulous mountain and lake surroundings by thousands of visitors every year.