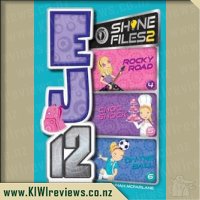 I had read some of the EJ spy books to my four year old son. Both he and I really loved them so I thought that it was a good idea to grab EJ12 Girl Hero: Shine Files 2 when it was available to review. We have missed a number of the books in between the first few books and this collection of books.

Mr four wasn't as excited by this book as he was by the EJ books. I think that the fact that the EJ12 books are about an older girl, he didn't have as much in common with the characters in the book. I, however, still enjoyed reading the books and was very happy to carry on without having to share them with anyone. I would see girls around 8-12 just loving these books and could imagine themselves on secret missions just like EJ.

Shine Files 2 is the second trilogy in a series featuring Emma Jacks, aka Special Agent EJ12 with the SHINE agency under-twelve division. Each of the stories combines EJ's special talents for code breaking and preventing the criminal activities of SHADOW, a group which is bent on making money and serving their own ends at any cost, with her other more commonplace interests - music, animal welfare, and sports. As a hero, EJ represents every young person's dream to be extra special in some way.

The first story, Rocky Road, deals with the world of popular music and rock concerts. While practising to take part in a school band competition with her friends, EJ is assigned to duty at the legendary Pink Shadows concert and, with the help of her friend Elle, manages to save the world from a deadly threat. The second story, Choc Shock, is set against the world of reality TV. In the middle of fundraising to support the local animal shelter by selling home-made chocolate cakes, EJ is called on to work as an undercover investigator which sees her competing against other young cooks in the annual Choc Chef challenge. The last story, On The Ball, offers a very different camp experience - one where EJ not only stops SHADOW's plans yet again, but learns some soccer moves in the process!

What makes all three of these tales accessible to young readers is their unique combination of the everyday - learning to cook, being part of a school band, playing soccer and other sports, and interacting with a close group of friends both in and out of school; the science fiction component, which relies heavily on gadgets inspired by those used by adult heroes like James Bond and global spy networks which support Emma in her quests to overcome the evil plots of SHADOW; and the emphasis on higher problem solving incorporating word games, computer systems, code breaking and logic puzzles which educate the reader while they entertain. Certainly there is much to encourage a young person to keep reading on, and as the stories are not too long, they are fast paced and there is no chance that they may become boring. The world of the 8-12 year old, which is the target group for the stories, is authentically presented through the use of everyday speech and frequent references to familiar family relationships, school life, and typical leisure activities.

Miss Seven is reading so much and so fast that I am struggling to keep her supplied with books so it was great to get this latest book Shine Files 2 to review as it contains three books in one. Book Four; Rocky Road, Book Five; Choc Shock and Book Six; On the Ball.

Miss Seven was pretty excited and thankfully this kept her sorted for a few nights. EJ12 is for slightly older readers than the EJ Spy School Books and would suit more an age 8 years and up reader. My Miss Seven is reading at an age ten level and seemed to cope with the stories in this book though did need explanations for some words like 'ingenious'. Miss Seven was able to ask for help though when she didn't understand something so I didn't have a problem with her reading this independently. She really enjoyed these three books. Her favourite was Choc Shock.

She said she liked the adventures that Emma has and that Emma has to do lots of thinking when she does her mission's to figure out what to do. We both like that Emma is independent and comes across as a really good person who is always trying her best at whatever she does. Miss Seven liked that Emma has to figure out codes and thought that makes her a good leader. The code cracking is fun and I think that does hold the interest as it ensures that the reader is thinking as they read. Emma does come across as a good role model and for that reason I think these are really good books for my daughter to read.

My Miss Seven is really enjoying the EJ 12 books having read the Shine files 1 also. I definitely prefer her reading books like this rather than a certain fairy series that she is obsessed with! Although she needs no encouragement with reading these I will definitely be looking out for others in the series and can definitely recommend not only Shine Files 2 but Shine Files 1.

A brilliant series and at $21 very good value for money.

Grandpa's in the hospital and hating it. He swears at the nurses and makes trouble for everyone. Dad finds it too stressful to visit, but Gottfried Junior visits Grandpa as often as he's allowed, and when he's not allowed, he goes anyway.

Grandpa thinks only of the place he was happiest - the island where he lived with Grandma. He wants to go back one last time, but they won't let him out of the ... more...