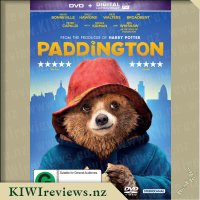 Disclosure StatementFULL DISCLOSURE: A number of units of this product have, at some time, been supplied to KIWIreviews by Sony Pictures Home Entertainment or their agents for the purposes of unbiased, independent reviews. No fee was accepted by KIWIreviews or the reviewers themselves - these are genuine, unpaid consumer reviews.
Available:
April 2015 I was a person who grew up with the sketched books of paddington and the animated tv series later. So I was nervous this would not deliver... IT DID. This is a great example of a recent family film.

I have watched a lot of family movies over the last 20 years and this is one of the few I have bought several copies of the DVD to gift to other families. The story is good. The acting is good. The relationships are well developed. The visual is very vivid and the appropriateness for the whole family is definitely there. It ever has a moral message to those who want to read a bit more into a fun filled romp with a very likeable family.

The story is clear and operates on different levels for the different audiences. The "bad guy" is scary but not so scary that the 4 year olds were frightened. I found the use of a Scottish man to play an English man and an English lady to play the Scottish lady showed the quality of the acting and the determination to stick to the style of the original.The family are modern and old fashioned at exactly the same time which is remarkable.

My biggest worry was that the writers would make Paddington silly rather than naive but the balance was just right for a bear in a different environment doing his best to learn. I loved the intro sequence in deepest darkest Peru and it was a visual feast throughout with the action sequences being wonderfully slapstick in nature.

I would recommend this film to anyone and have been doing so for the last year - a family favourite for many years for us.

I know the story of Paddington and seeing it come to the big screen, I was eager to see it. However it wasn't until we recently bought it on DVD that we finally got to see it.

We start of with some good, basic background to Paddington and just why he ends up at Paddington Station in London and gets his name, lovely moment of 'here's my name in bear but you can't pronounce it'. Of course Hollywood needed to come up with a bigger storyline and thus we have Kidman playing a museum worker who wants to add Paddington to the collection. The plot is nothing brilliant, there have been many a variation of it, but it is still a fun family film that has the ability to delight.

There is a good range of actors in this film, my kids delighted in yelling 'there's the Doctor!!' aka Peter Capaldi. No one is going to win an Oscar for their role but they all do a great job and it is easy to see them as real people, even though Capaldi and Kidman are a little over the top at times. There is CGI required, naturally Paddington isn't real, and other than a couple of iffy moments, the CGI is done well and Paddington blends in well with his natural surroundings, and dang it if he isn't suitably adorable.

My eldest is hoping for a Paddington 2, 3, 4, 5, 6.... and so on, so I think it's easy to tell that he enjoyed it. My other two kids enjoyed it and are also hoping for another one. My mum and I could easily spot some references to other films, always fun. A good, fun, family film, I wouldn't mind a number two.

There's a secret war being waged in the homes and neighborhoods of Earth that the humans don't even know about; an eternal struggle between two great armies: the Cats and the Dogs. The film follows a Cat's plan to destroy a new vaccine, that if developed, would destroy all human allergies to Dogs, and the Dogs' efforts to stop the Cats. Specifically, it's the story of a young pup (Tobey Maguire) whose job it is to guard ... more...