Bat Out of Hell review 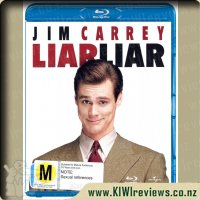 Would I lie to you?

Fletcher Reede is a fast-talking attorney and habitual liar. When his son Max blows out the candle on his birthday cake, he has just one wish - that his dad will stop lying for 24 hours. When Max's wish miraculously comes true, Fletcher discovers that his biggest asset - his mouth - has suddenly become his biggest liability! Hilarious havoc ensues as Fletcher tries to keep his practice afloat and his ex-wife Audrey from taking their son and moving to Boston.

As well as being funny Liar Liar also has a good moral to the story, lies and broken promises can wind up costing you everything you love. It also teaches you the importance of not putting work before the ones you love. It's a movie I recommend to anyone who needs a good laugh as it really is a laugh a minute and is Jim Carrey at his best. After watching it I often find myself giggling every time I pick up a blue pen. I'm not sure why but the pen scene is one of my favourites!

Liar Liar is a movie that I grew up watching and it's still a fun movie to watch today (with a good lseeon underneath it all).

Fletcher is a lawyer who constantly breaks his promises to his son, so on his birthday, when he blows out the candle, his son wishes that his dad can no longer lie. What follows is a tonne of hilarity starting with Fletcher saying "I've had better' after a round of sex with his boss. Fletcher has to try and work around it whilst being in a business that relies upon lies, try to fix his relationship with his son and stop his ex-wife and son from moving across country.

Jim Carrey is brilliant as Fletcher, fully convincing with just the right touches of silliness, humour, crassness, ego and desperation (in the end). The young boy playing Max does a brilliant job, you really feel for him and hope that his dad figures things out in time so that they don't loose each other. The jokes come hard and fast but there is truth to this movie, that we shouldn't lie, that really does move you and you're rooting for Fletcher and Max by the end of it.