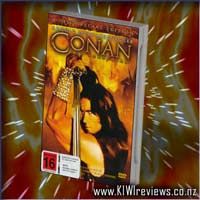 Orphaned by a cold-blooded cult leader and his band of brutal marauders, Conan endures a childhood of merciless slavery only to become a gladiator for the amusement of his captors. Sent to the Far East to hone his fighting skills, Conan is freed and begins a dangerous, full-blooded quest to avenge his parents' massacre.

Now, the sword-wielding warrior must vanquish his bloodthirsty enemies in a death-defying action-adventure about courage, strength, character and the triumph of good over evil.

This is the DVD re-release of the 1982 classic. When I first saw this movie, it inspired me to begin learning swordsmanship. 20 years down the track and I still find myself taking great pleasure from it. Seeing a young James Earl Jones with long hair, and a shiny Arnie in barbarian outfit... well, it's interesting to see how far they have come in their careers.

The story interested me, despite being a dramatisation. It made me curious about how we have evolved culturally, and sparked much of my interest in mythos and history. Oliver Stone's script placed the Conan story in a post-apocalyptic future rather than the distant past. I am glad this was put aside and the original storyline was followed, as I just can't see Conan the Barbarian weilding a chunk of downpipe and trying to fold himself into the back of a beaten up taxi.

Since it was clear that Arnold Schwarzenegger and Sandahl Bergman (Warrior-Thief Valeria) did their own stunts, due to the unavailability of suitable body doubles, the action scenes had a smoothness not usually found in those days. However, it was also very clear that the actors weren't as lithe and flexible as stuntdoubles usually are. After all, Arnold Schwarzenegger had to tone down his workout, because his arm and chest muscles were so big that he couldn't handle a sword properly!

In interesting thing to note, although Conan and Valeria are shown together frequently throughout the movie, Conan only speaks five words to her in the entire film - and they're all in the first thirty seconds after they meet: "You're not a guard", and "No". I knew his english was bad, but it wasn't THAT bad, even back then... as evidenced by his little speech around the campfire before he was released to freedom.

Taking into account this movie is over 23 years old, don't expect brilliant special effects. They are good, for their day... most impressive would have to be the giant snake they encounter in the tower.

And a bit of trivia for you: The fake blood used in the film came in the form of a concentrate, which had to be mixed with water prior to use. Due to the cold weather, it was mixed with vodka (as an anti-freeze) instead. In the scenes in which the actors were supposed to spit the blood, they would swallow it instead, then go back to the special effects man for more.

Overall, a great re-release that holds a position of pride on the shelf. It even starred one of my favourite 'darker' actors, Max von Sydow as King Osric. So if you are an Arnie fan, a Conan fan, or just love classic movies from the 70's and 80's... go get this! I look forward to the re-release of the second Conan movie, "Conan the Destroyer". And if you are a die-hard fan, let's see if Red Sonja gets released.

Just to correct something, Arnold's debut was in 1970, as the star of "Hercules in New York". This was his 8th movie. And if you want a real laugh, hire/buy 'The Villain' aka 'Cactus Jack', a wonderful Western spoof with Arnie as 'Handsome Stranger'.

Berlin student Jule is hopelessly indebted due to an accident she caused, hitting a rich businessman's limousine.

Evicted from her flat, she moves in with her boyfriend Peter and soon learns that Peter and his flatmate, Jan, are breaking into luxurious mansions at night. Instead of stealing or vandalizing, though, they carefully and ... more...