The House of Magic review 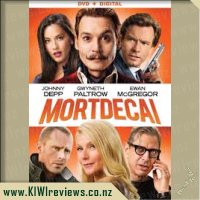 Disclosure StatementFULL DISCLOSURE: A number of units of this product have, at some time, been supplied to KIWIreviews by Roadshow (NZ) Ltd or their agents for the purposes of unbiased, independent reviews. No fee was accepted by KIWIreviews or the reviewers themselves - these are genuine, unpaid consumer reviews.
Available:
at selected online sales sites and retailers

Like watching a train full of clowns derail... that's basically the lasting impression I got from this. It was supposed to be funny, but it was one long, drawn-out wreck in progress and I had to keep watching to see what was coming next.

The main character, Mortdecai - played by the ever-offbeat Johnny Depp - is actually one of the weakest characters in the movie for me. By far the more entertaining characters are his 'ruggedly handsome, bad-boy-looks manservant - played by Paul Bettany - and his shallowly-charming but highly manipulative wife - played to perfection by Gwyneth Paltrow. Watching her expertly manipulating the emotions of the love-struck inspector, and Mortdecai's arch-nemesis - played by Ewan McGregor - was somewhat disturbing to watch from the perspective of a married man.

This movie had me in mind of an American attempt to capture the 'bumbling heroes' vibe from such flicks as The Pink Panther and Johnny English. I am not at all sure if this was yet another American failure, or a catastrophic British failure... but either way, despite finding it mildly entertaining, it rapidly paled into 'background noise' as I found myself getting distracted by other tasks that had more appeal... such as playing Bubble Mania on my phone... and I am no fan at all of such silly little time-waster games.

Overall... predictable plot, weak acting, wishy-washing characters, and nothing of any real strength in either the drama, thriller or comedy categories... the only thing about this movie that surprised me was the fact it survived long enough to ever reach general audiences. Sorry Johnny, but this wasn't anywhere close to your best work. Go back to the days of Benny & Joon. This film was not as good as I had hoped. With a cast that includes such big names as Johnny Depp, Ewan McGregor, Gwyneth Paltrow, Olivia Munn, Jeff Goldblum and Paul Bettany, I really expected something spectacular. I will admit that I haven't read any of the comic thriller novels that this film is based on, so maybe this could be a potentially accurate representation of the material.

But from a standalone, no back-story film, I was unsure what to make of it. It neither struck me as a comedy, nor a thriller; it just happened. Johnny Depp played his typecast oddball character, who fumbles around much like a less intelligent, and less independent version of Sherlock Holmes. Always by his side, his manservant (played by Paul Bettany) is really one of the more humourous members of the cast, despite his character very much being comprised of only two things; his ability to pick up women in any situation, and his ability to get shot.

I really think that there needed to be more of an introduction to the main character, rather than being spoonfed a number attributes and running with it, hoping that the viewer can follow the story. While advertising "sophistication" the plot was more like a lackadaisical 'Lock, Stock, and Two Smoking Barrels' remake, and it really didn't work for me.

Visually, the film was well done. The transitions worked well, and the blood and gore of the film was portrayed with subtlety, and many of the "comedic" elements were implied rather than being simply pushed in your face. The special effects worked well and were largely believable, but what wasn't believable was the acting. It fell in the range between hilariously comical and sophisticated, and unfortunately included neither of them.

The character of Mortdecai is effectively Captain Jack Sparrow on mood suppressants/stabilizers, dressed for the civilised world. Olivia Munn and Jeff Goldblum have such limited screentime that it could almost be considered a cameo, and not really justifiable having them on the cover of the dvd. I found myself losing interest as the film progressed, and the usually enjoyable bloopers in the special features are made dull by Johnny Depp's monotonous narrative over the top.

I really don't know what they were aiming for with this film, but I was less than impressed.