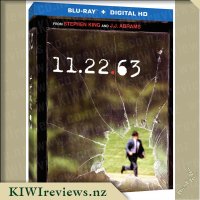 Disclosure StatementFULL DISCLOSURE: A number of units of this product have, at some time, been supplied to KIWIreviews by Roadshow (NZ) Ltd or their agents for the purposes of unbiased, independent reviews. No fee was accepted by KIWIreviews or the reviewers themselves - these are genuine, unpaid consumer reviews.
Available:
August 2016

Encouraged by his ailing friend (Chris Cooper), Jake journeys back to 1960s Texas to prevent the assassination of President John F. Kennedy. As Jake explores the mysteries surrounding alleged assassin Lee Harvey Oswald, his mission is threatened not only by Oswald, but also by a beautiful librarian who steals Jake's heart... and by the Past itself, which doesn't want to be changed.

And if the Past doesn't want to be changed, it will push back - violently. I got asked whether this would be a product that I would be interested in, and as I went through several years of reading as many Stephen King books as possible, seeing one of his novels turned into a mini-series, I felt there was a high chance of me enjoying it, despite having never read that specific story.

The initial premise is an interesting one, the ability to go back in time and change a major historical event for the "better". Of course I use quotation marks because there are always people on both sides of the fence as to how events should have taken place, and the potential butterfly effects of changing that event. Of course one can never truly determine what would happen if something changes, because you are always basing it on events that occurred in a world that didn't change...if that makes sense. In essence, the premise makes you question a lot of things; your priorities, the importance of other personalities involved, how involved you would get, and what other things would you change if you could. It makes you reflect on yourself, and your past.

Again, I haven't read the book, so I didn't know how the story works around the assassination of JFK, but for a story that is based around the ability to go back in time and resetting any time you fail, well, I was expecting more time-travel, and more "alternate realities". As it is, the mini-series plays more like a period piece where the protagonist is a great detective (maybe a 1960s Batman), and getting to the 1960s itself was a bit tumultuous for me. While it was obviously necessary for the storyline to continue, I struggled to empathise with James Franco's character, and couldn't really find the justification in him carrying on with the self-imposed mission of Chris Cooper' character.

Over time through the series the characters slowly grew on me, as their roles started to take up more significance, and the romantic relationships started to become the most compelling part of the series for me. Many times through 11.22.63 I lost sight of the overall plot as I was taken in by the minor story arcs, and it is in these minor arcs where the majority of the action is, as the main story arc is largely "spy" work; listening, following, hiding, sneaking (not the most exciting thing to watch). The difference in action between the major and minor plot lines, means the pacing of the series is rather inconsistent, with some scenes having you on the edge of your seat, while others have you hoping the scene ends soon.

Character-wise, I thoroughly enjoyed Sarah Gadon's portrayal of Sadie Dunhill, and she came across as a completely authentic character from the 1960s, which was a pleasure to watch. On the other hand I have never been a fan of James Franco, every character that he has portrayed in other works seem to have the same quirks and personality, so I don't see the character Jake Epping/James Amberson, I just see an out-of-place James Franco (whether that was the aim for a time traveller, I don't know, but it wasn't to my liking).

The environments were stunning, giving a very dated feel to the show, and I must applaud whoever set up the clothing for the final episode. So much of it looked identical to documentaries I have seen over the years. Looking at the end of the story, it didn't end how I expected, but in may ways it still did. It brought most of the minor story arcs to a close, and managed to leave you with a warm feeling in your chest (Leon Rippy's portrayal of Harry Dunning was very emotive).

Definitely enjoyable overall, and worth a watch, but I would have much preferred, a more loose adaptation, stretched out over many seasons perhaps. There was so much more potential there with the time travel possibilities, and the consequences of time-travel (I haven't talked about it, and I won't. I'll leave that as a surprise).

Learning is more fun when you do it with friends! This DVD contains a selection of episodes from HIT Entertainment:
•  Thomas: Thomas & the Colours
•  Barney: The New Kid
•  Pingu: Pingu and the Rubberband Plane
•  Bob the Builder: Dizzy & the Walking ... more...