« I Wanna Be a Pretty Princess review

Defender of the Realm review 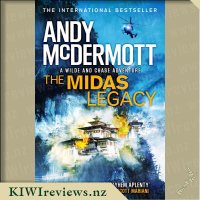 Disclosure StatementFULL DISCLOSURE: A number of units of this product have, at some time, been supplied to KIWIreviews by Hachette or their agents for the purposes of unbiased, independent reviews. No fee was accepted by KIWIreviews or the reviewers themselves - these are genuine, unpaid consumer reviews.
Available:
September 2016

The twelfth in the fantastic Wilde/Chase series sees Nina trying to follow in her late mother's footsteps as she and husband Eddie search for King Midas' legacy. A return to Atlantis - The lost city has defined Nina Wilde's life. Her parents' obsession with Atlantis cost them their lives, but finding it brought Nina to her husband Eddie Chase and a series of archaeological treasures.

A decade later, the International Heritage Agency needs their help to locate the Secret Codex, an account of ancient Atlantean explorer Talonor's journeys, thought to be located in the dangerous underwater ruins of Atlantis. Unable to resist one more adventure, the couple join the mission. But when a long-lost relative reappears in Nina's life, asking her to use the Codex to find a hidden cave containing the secret of King Midas, she is unprepared for the devastation that follows. The promise of unlimited gold has aroused the greed of powerful and ruthless forces... and only Nina and Eddie stand in their way.

It is said that there are only 12 stories in the world, and all others are variants or derivatives of them... if that's the case, this story really pushes the limits of how far you can push a story into the realms of fiction, and have it still retain enough credulity to seems though it might, just might, be true.

Following on from the tale of the discovery of Atlantis by the protagonists - which I haven't read so can't relate to - this story extends the reach of that mythical civilisation up into the mountainous areas around Nepal. We are introduced to an ancient artefact that, when coupled with a natural wonder, gives rise to something that could be a semi-plausible basis behind the myth of Midas and his golden touch. What impressed me the most, at this point in the story, was how the part of the myth relating to Midas' daughter was incorporated in a way that was consistent with, and complementary to, the plot device.

The artefact in question, of course, is sought after and eventually stolen by, a mysterious group who want it for their own profit and aggrandisement, and I was tickled by the way in which the current "global boogierman" - North Korea - was shoe-horned into the plot too. It added a wonderful new twist, another layer of plausibility, and a really nice tongue-poke to the rogue nation, all of which make a story that much more enjoyable to read.

I usually take around a week to get through a book of this size - 616 pages in Trade Paperback format - but I found myself dwelling on the story while trying to sleep, and ended up pulling a couple of all-nighter reading sessions so that I had chewed through this action-packed tale in a little under 3 days. That's rare for me these days, with a lot of other claims on my time requiring me to get a good night's sleep during the week.

Overall, as a first-encounter with McDermott's works, I was quite impressed. I am aware he has a good track record already, but he's a new author to me, and I am now hooked on finding the Atlantis title so I can fill in a bit of the backstory you are assumed to know when reading this book. A worthy author, who I compare favourably with the likes of Clive Cussler - who also writes in a style I find equally compelling reading.

Vv Vinny Viper's voice was hoarse. He couldn't sing a note. The vet looked in and found a frog in Vinny's throat.