The Raven and Other Tales review 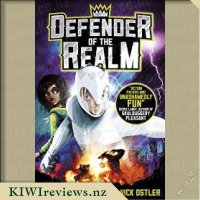 Defender of the Realm product reviews

To quote my nine year old 'this looks like an exciting book' and it was.

I'm always a bit cautious when a book is written by two people, I'm always concerned that it just won't gel together that well but Mark Huckerby and Nick Ostler do a great job at creating a story that is packed full of drama, adventure and excitement, a trip into a fantasy world that I thoroughly enjoyed. Set in contemporary times, Defender Of the Realm is the first in a series that might make you look at the monarchy of the United Kingdom in a whole new light! Alfie is a fourteen year old boy and a reluctant heir to the throne, he wishes he was "ordinary," and didn't have the responsiblity of a kingdom resting on his shoulders but with mere seconds between him and his brother, king he does become.

We the reader, along with Alfie, are pulled into a whole new world of secrets, underground passages, magical powers and monsters that wreak chaos from the Thames right through to Edinburgh Castle. Along with his new friend Hayley, Alfie discovers that there is a lot more to being King and being a hero than he could ever have imagined and they must work together to prevent a deadly force in its attempts to get ultimate power for itself and destroy Great Britain. The characters are well written, Alfie is perfectly awkward and his to his friend Hayley who helps a huge amount within the tale.

The plot is entertaining and action-packed with some great battle sequences that are simply breath-taking. The world Alfie lives in is convincing and there is plenty to keep the book going. The tale ends on a big cliffhanger which has me keen on reading the next instalment.

Hi. It's me, Quips, Skips' cousin. It's game night, and I am here to make you laugh. I am also here to test your knowledge with this awesome book of activities, games and puzzles, all based on your favourite characters from Regular Show. Zingo.