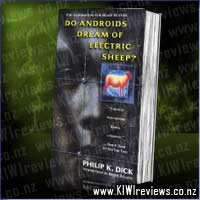 By 2021, the World War had killed millions, driving entire species into extinction and sending mankind off-planet. Those who remained coveted any living creature, and for people who couldn't afford one, companies built incredibly realistic simulacrae: horses, birds, cats, sheep... They even built humans.

Emigrees to Mars received androids so sophisticated it was impossible to tell them from true men or women. Fearful of the havoc these artificial humans could wreak, the government banned them from Earth. But when androids didn't want to be identified, they just blended in. Rick Deckard was an officially sanctioned bounty hunter whose job was to find rogue androids, and to retire them. But cornered, androids tended to fight back, with deadly results.

Do Androids Dream of Electric Sheep? was first published in 1968. Grim and foreboding, it was, and still is, a masterpiece ahead of its time. Filmed under the title of "Bladerunner".

This is a very interesting story that is really quite different from the one portrayed in the motion picture 'Blade Runner', that is based on this book. Both 'stories' have significant merit in their own right.

In the original story we follow something akin to a mid-life crisis period of a man, Rick Deckard, bounty hunter. He lives on a toxic Earth, post World War Terminus, while most who can afford it (and who pass the tests) have emigrated to off-world colonies. He is hounded by a deep longing to own a real animal, a big one preferably, but anything real would boost his morale above the secret shame of his current situation. He owns a sheep, keeps it in a covered roof pasture of the tenement building he lives in and tends it every day, but it's an electronic fake. You'd never know as they are crafted so masterfully, but HE knows. His copy of 'Sydney's Animal & Fowl Catalogue (latest supplement of course) is always creased and much read, and never far from his reach. There are so few real animals left and the prices are exorbitant. That is why he desperately needs this next assignment to 'retire' a group of renegade androids that have escaped the outer colonies and are hiding out on Earth. At one thousand dollars a piece, and six of them to hunt down, that would go a long way toward securing a good time payment deal on a decent real animal, maybe an ostrich or a goat. But these escaped androids are the advanced Nexus-6 type - no easy prey. Chief bounty hunter, Dave Holden, had taken out the first two and very nearly been taken out himself. He was now in a critical condition with a laser track through his spine and no chance of being out of hospital in less than a month. Hence the opportunity for Rick Deckard...

A thought provoking a very readable story. First published in 1968, still easily holds it's own as a SciFi masterpiece.