Happily Ever After: The Princess and the Pea review 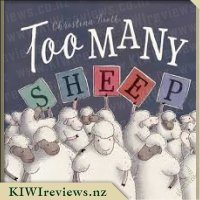 Too Many Sheep product reviews

How can sheep help you sleep? They climb through the window and walk through the door. They sit on my bed and jump on the floor. They play hide and seek. They go down the hall. They shower and shave, and there's one on the loo! They have snacks in the kitchen. Oh, what will I do? Grandpa Jack says counting sheep helps him sleep. But a house full of sheep mean chaos, not calm.

On receiving this I was immediately drawn to the cover of the book. I love the simplicity of the cover, along with the sheep as children love to see animals, also the different font styles and colours really caught my eye. We proceeded to open the cover and the children were amazing at all the sheep inside the cover of the book. I love the fact the book has a hard cover, it makes it more durable and easier to store away from little hands.

My children and I read through the book together twice to get a good feel for the book. My 3.5 year old was very engaged in the book, and it was great she could joining in with counting the sheep from 1 to 10. I love books that encourage learning and counting. The story was basically about a little boy who couldn't sleep so his Grandpa suggest he count sheep to help him sleep. The story was full of basic but really eye catching illustrations throughout the whole book. The layout of the story was really basic and easy to read. I felt it was the perfect length book, it wasn't too long and wasn't too brief either. This is a great read, my children now pick it every night to read as their bedtime story.

Value for money also gets my tick and we love books supplied by Scholastic, most definitely a book I would buy in the future for family/friends. $25.00 is pretty reasonable for a great children's book that they are sure to love. I felt this book would be best suited for ages 4 to 8 years old, but in saying that my 2 year old loves flicking through the book to find the sheep that are hiding and to count the sheep. Overall a very good book.

I was excited to get to review this book called 'Too Many Sheep' by Christina Booth. The first thing that caught my eye on the cover was the lack of colours. In my opinion I think this works really well as it draws you into the pictures with simple colours. The title goes perfectly with the picture as there are lots of sheep on the front

The concept of counting sheep is something that lots of people grew up being told by there parents and its something I often say to my daughter when she can't sleep. However she is only 3.5 and sometimes doesn't quite understand what I mean. This book was great as it gave her a visual and some funny ideas about counting sheep and some things they can get up to.

I like the humor in this book and the fact that the boy has lots of different ideas about what to do with the sheep and how to try and start counting them. I don't want to give away too much of the story but Grandpa Jack gives a good description of how he falls asleep but the boy just can't understand how it can work. In my opinion this book relates to children and helps to get them think about how sheep can help them fall asleep.

I like that this book is a hard cover book so nice and easy to hold onto when reading with a child as it doesn't go all flimsy. I love that the basic colours and uncluttered pages is carried on from the start of the book to the end of the book. All in all I think this is a good book but I think perhaps its would be better suited to children a bit older than my daughter.