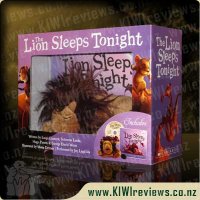 Disclosure StatementFULL DISCLOSURE: A number of units of this product have, at some time, been supplied to KIWIreviews by Scholastic (NZ) or their agents for the purposes of unbiased, independent reviews. No fee was accepted by KIWIreviews or the reviewers themselves - these are genuine, unpaid consumer reviews.
Available:
November 2013

•  Best-loved song, now a beautiful book with a cuddly lion plush, to treasure forever
•  Includes CD with recording by popular actor/singer Jay Laga'aia
•  A perfect gift for children, and a nostalgic keepsake for adults
•  The stunning artwork will appeal to children and art fans alike

I was so excited to have won this from KIWIreviews. As it was christmas we gave it to my three year old from santa and was an instant hit. We opened it up and while she cuddled the little lion (now named Simba) I read/sung the story. The pictures are absolutely fantastic and we were all singing away by the end.

The song is incredibly easy to sing along with that even my husband was taping away to it. As we were driving to Auckland we put straight into the CD player and we were singing away to it numerous times on our long journey.

This has to be one of the best CD/Books we have ever received. I did not find the song or Jay Laga'aias voice annoying. It is beautifully sung. There are 3 versions on the CD. The original which is just sung like the book (although different in one area), the instrumental which just has the wee-ooh wim-o-weh part and you sing the rest of it and then the 3rd version which we gave up on and just replayed the first one.

This is a great present for preschoolers. It will definitely be a family favourite as we are all loving it. My six year old has been reading/singing it all the time to her sister and they are just always humming to it. Simba has now proudly taken up a spot by my babies pillow, much to the annoyance to our cat. Really a fantastic book/song.

When I saw this was up for grabs to be reviewed I was very excited since my 5 year old daughter just did wearable arts at school and this is the song they sang for it. The little lion is very cute and cuddly don't put him close to your mouth though cause he leaves his fur with you so for little ones this wouldn't be too good for them to chew on, but he is soft and good for little hands to touch and fell and enjoy. My son thought the lion was awesome he was going around raaaaing at everyone with it.

The CD has three different versions on it, It has the song with the book as the first one, then it has instrumental and acapella versions. Sadly the book and CD I don't feel actually match up. When it does the "In the jungle peaceful jungle the lion sleeps tonight" there are two pages for this but it does it twice, this confused my 5 year old who is learning to read she couldn't work out where the book was at for the CD. I wasn't a fan of the instrumental part this lost my kids interest completely, prob be good for little ones that are going to sleep or just chilling out playing on the floor, but with my kids age 4 and 5 they like singing ones.

I have found if someone didn't actually know the song they wouldn't know it goes twice for each bit as the book is a bit confusing it doesnt really show that, as it does one part once. It would be good if it was on the double sided page and then the second bit on the next double sided page, this would make it all make more sense, would make the book a little longer but would be worth to make it all make sense well for me and my kids anyway.

The book is nice and small in size the illustrations are lovely, its a soft cover so you wouldn't want to give it to a under 3 as they could chew on it and it will rip. There is a lot of detail put into the pictures in the book, look at at faces of the animals they are awesome.

This would be a great gift for a little one, I'm still debating if I keep it in my resource bin for when I go into daycares or if I give it to a younger child in my family for xmas or a birthday. Decisions are so hard cause its such an awesome set, I normally wouldn't pay this much for a book set but thats cause I'm on a budget but if it came down in a sale I would be there.

I have been pondering what to get my wee nephew for Christmas for the last few months. He will only be 4 months old and with an older brother there is nothing he needs. The Lion Sleeps Tonight from Scholastic with a book, CD, and cuddly lion is perfect. The box says not for children under three but apart from enhaling some fluff from the lion's mane it is perfectly safe.

I shared this story with my preschoolers and they loved it. One of them kept saying to me "Pumba sings this." It shows how long this song has been around, for me this song will always be BoneyM but for the kids it is Lion King. The illustrations are a paler version of the Lion King too. The animals are all personified, such as the crocodiles waltzing and the water buffalo standing on two legs holding a walking stick.

The CD consists of three tracks the first being lyrics and instruments, the second instrumental and the third acapella. I had expected on of the tracks to be a reading of the book but this was probably not an easy task as half of it is the "Wim-o-weh" bits. I found when I read it without the CD it was impossible to do without singing it. Jay Laga'aia who the children know from Play School proved he has a great singing voice. The tracks are very long for such a short book. Also in the book each line of the lyrics is only once whereas in the song we all know (and the CD) each line is repeated. For these reasons I found the CD was better as a lullaby for the kids and would put it on repeat for the night.

The cute and cuddly lion finishes off the gift set. The kids all loved him. He has his eyes closed to indicate he is sleeping. While we were reading the book the kids loved rocking and stroking the lion. At $29 it is within my price range and is a lovely gift with the three parts. Hopefully I can rebox this for Christmas and keep it hidden from my kids if not I'll have to buy another set.

The New York Sate Library. A brooding labyrinth of towering bookcases, narrow aisles and spiralling staircases. For Doctor Stephen Swain and his daughter, Holly, it is the site of a nightmare. For one night this historic building is to be the venue for a contest. A contest in which Swain is to compete - whether he likes it or not.

The rules are simple. Seven contestants will enter. Only one will leave. With his daughter in his arms, ... more...