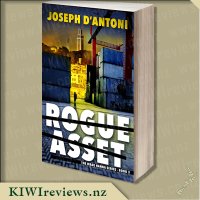 Disclosure StatementFULL DISCLOSURE: A number of units of this product have, at some time, been supplied to KIWIreviews by Joseph D'Antoni or their agents for the purposes of unbiased, independent reviews. No fee was accepted by KIWIreviews or the reviewers themselves - these are genuine, unpaid consumer reviews.
Available:
in hardcopy and eBook formats

Book 3 of the Wade Hanna Series

A fugitive MI-6 agent has gone rogue by supplying Russian arms to rebels in a West African nation.

Wade Hanna accepts the deadly Tangier assignment to stop the arms before they arrive. His fellow agent and lover, Megan, remains in the dark about his disappearance.

Unwelcome uncertainties greet Wade when he finds his separation from Megan may be permanent at the hands of others he can no longer trust.

The third piece in the Wade Hanna literary puzzle from D'Antoni, this title seems to slip backwards a little from the benchmark set by Book 2 - Lethal Authority. It's still far more polished than the first book - Silent Sanction - and I even found myself going through the book with a red pencil marking bits that just didn't seem to fit right, including a strange and isolated continuity error which I felt I had to report to the author directly. Still, if you overlook the few small glitches that always seem to be the bane of self-published titles, this was a decent read.

Wade is now a fully-fledged member of the Intelligence community, and after a chance meeting with a shadowy, but very influential, member of the freelancer branch, Wade is whisked away to exotic locations for briefing and to act as a surveillance operative, selected mainly because of his lack of track record. Nothing as good as a fresh face when it comes to keeping an Op on the QT.

It was good to see, in this title, how the life of a spy isn't all fast-paced and racy. We were given some insight to the periods of tedium when an operative is in-place but waiting for 'the other team' to make their next move... the lead-up time when they are setting in their cover story and persona, doing basic recon, etc. before the mission kicks into full motion. While I doubt all operatives has such wonderfully pleasant cover stories as young Wade was given, I can imagine even the nicest facade still has it's negatives.

Overall, though this series is still holding my attention, I am really hoping that Book 4 gets a bit more editorial, proof-reader and plot-developer treatment. Maybe I have become jaded, or just spoiled, by the mountain of top-quality books that have passed under my eyes since I started doing book reviews, but I am really wanting this series to get revamped so it can achieve all the potential I think it has hidden in it.