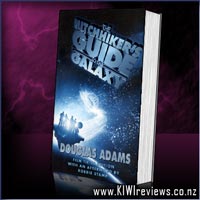 Disclosure StatementFULL DISCLOSURE: A number of units of this product have, at some time, been supplied to KIWIreviews by the company for the purposes of unbiased, independent reviews. No fee was accepted by KIWIreviews or the reviewers themselves - these are genuine, unpaid consumer reviews.
Available:
Any good Bookseller

One Thursday lunchtime the Earth gets unexpectedly demolished to make way for a new hyperspace bypass. For Arthur Dent, who has only just had his house demolished that moring, this seems already to be more that he can cope with. Sadly, however, the weekend has only just begun, and the galaxy is a very strange and startling place.

The Hitchhiker's Guide to the Galaxy is now a major motion picture from Touchstone Pictures, starring Sam Rockwell as Zaphod Beeblebrox, Mos Def as Ford Prefect, Zooey Deschanel as Trillian, Martin Freeman as Arthur Dent and Bill Nighy as Slartibartfast. John Malkovich and Anna Chancellor play new characters developed especially for the film by Adams himself. This film tie-in edition of Douglas Adams perennially popular novel includes an Afterword by Robbie Stamp, Executive Producer on the movie and a close friend of Douglas Adams. He explains how after twenty-five years the film finally came to be made, and describes how the cast and crew were assembled. Also included are exclusive star interviews, as well as movie stills and on-set photography from filming.

This combination of Douglas Adams' classic novel with behind-the-sences information is for all those who have been brought to Hitchhiker's by the brilliant film adaptation - as well as for those who have loved it in its radio, novel and television incarnations.

I was a bit apprehensive when I was handed this for review, being an avid Hitchhiker's fan I had seen the movie and was highly disappointed, so when I saw this was the "Film Tie-in" version I was not too sure what to expect......... Until I started reading and there was the Hitchhikers story we have all come to know and love. (NB: For those of you who have seen the movie but never read the book, heard the radio series or seen the television series then you may be a little confused, but stick with it, it's well worth it.)

Having had the misfortune of never hearing the original radio series or it's sequel (If any one has a copy i'd love to hear it!

) I was lucky enough to catch the television series on it's second airing here (Late at night on TV1) and was immediately hooked, I was off to the local book store soon after hunting down this amazing piece of comedy/scifi.

Obviously with a comedy/science fiction book the "Level of Realisim" rating probably doesn't fit, but Douglas Adams does such a fine job of describing his technology that you almost wish it could be real, as it sounds just so amazingly fun.

Whilst the extra stuff at the back of the book does make for interesting reading it's not really the main reason this book will be acquring a well earned place on my bookshelf.

Now if only the publishers see fit to release the other four books in the Hitchhiker's Trilogy i'd be set.