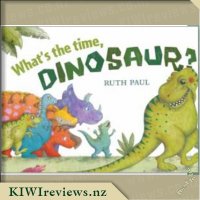 Disclosure StatementFULL DISCLOSURE: A number of units of this product have, at some time, been supplied to KIWIreviews by Scholastic (NZ) or their agents for the purposes of unbiased, independent reviews. No fee was accepted by KIWIreviews or the reviewers themselves - these are genuine, unpaid consumer reviews.
Available:
October 2015

Stomp by Ruth Paul is one of my daughter's favourite books, so when we saw that she had released a new book about the dinosaurs 'What's the time dinosaur?' I knew that it was a book well worth purchasing and adding to our growing collection. What's the time, dinosaur? is written in a way that follows a classic childhood game of what's the time Mr Wolf?, but instead of it being played with children and someone acting out as the wolf, it is changed to being about a dinosaur, of whom the other dinosaurs have to try and sneak up on.

I sat and read this to my daughter who was immediately drawn to the baby dinosaurs right from the front cover, and spent her time trying to find them on each of the pages. The illustrations are very well done with brightly coloured dinosaurs, each whom have their own personality which is well portrayed and stays with them throughout the whole story, I loved the way they made it so that you could tell what there personalities were like for example theres the dinosaur who obviously follows the rules, one who is sneaky and one who is a bit of a cheater, common characteristics that you would find if playing the game with a group of children, this was very well done.

The way the story is written is neat, it has lot's of rhyming words to it, and poses lots of riddles and questions which got my daughter thinking, for example "what's the time, Ankylosaur? One o'clock, plus seven more" this meant we had to use our fingers to count which number came next, this is a really good book for building on young children's counting skills, but also for helping them to learn how to tell the time, and it's done in such a fun way they wouldn't even view it as learning! Each of the pages also used lots of action and doing words such as under and over, tiptop, run and R-O-A-R, which could make this book quite fun for older preschoolers to act out.

Another lovely dinosaur book by Ruth Paul which i'm sure will be well loved in time to come, definitely worth buying if you have your own little paleontologist who loves dinosaurs! I look forward to seeing if Ruth Paul adds another book to this beautiful collection.

I think an important part of reading books with your children is also having the child join in while you read. This book was great and my son and I were both able to read it together, but more so my son reading it and I just helping out with a couple of the longer dinosaur names like Tyrannosaur and Triceratops.

When I asked my son what he enjoyed about the book and what his views and thoughts were, he replied "its easy and fun". He said he really enjoyed how it was easy enough for him to read and how it was a funny book and made him giggle. He said he also really like the pictures and that someone who is really good at drawing must have done them as they are so cool. He mentioned he also liked the variety of the dinosaurs having big ones and small ones, with his fave T-Rex at the start.

For myself I liked how the story line did not stay the same, for every dinosaur there was a new theme to it. For me it kept it interesting with out being repeatitve and boring. I also liked how there were smaller prints next to some of the dinosaurs like hehe and tum-te-tum. This made my son laugh and he thought it was funny.

Overall I think its a great book and I will deffinitley see my son picking this book up to read it again in the future. It interests him, its not to long, its not boring and its funny for him.

Since we only recently introduced our youngest daughter to Stomp by Ruth Paul, she was thrilled to see this book in our round of review goodies this time. She immediately asked me to read "dinosaurs" to her. We sat and read the book together, and could see from her face that she was taking in the illustration in particular for the first reading. She seemed confused at times and I wondered if maybe she thought it was Stomp but the words were all different. At the end, she smiled at me and then took the book for further pouring over by herself.

When I came back a wee while later, she had the Stomp book and this book open and was pointing between the two books carefully. I asked her what she was doing and she showed me that some of the same dinosaurs featured in both of the books. However, she then pointed to the baby in Stomp and shook her head sadly, that the baby was not in Whats the Time, Dinosaur? I know that she really identified with that baby sauropod. However, there was plenty in What's the Time, Dinosaur? for her to identify with. This is a game played between big dinosaurs and little (baby) ones.

I have vague memories of playing the similar "Mr Wolf" game at school, so it was fun watching the group playing with the rhyme and being sneaky. I could identify all the kind of kids as well, the cheaters, the shy ones, the teamwork. My daughter really liked the sneaking up happening on most pages. She giggled behind her hands as they got closer and closer. Through reading this more and more with my daughter, we found lots of neat things to look at and laugh at. This one quickly became a favourite for her to request, which made other books difficult for me to sneak in. Another awesome book for your own little dinosaurs.