The Tears of Harry Wakatipu review 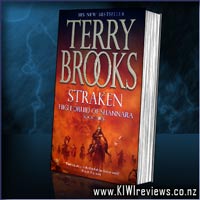 The High Druid of Shannara trilogy draws to a thrilling conclusion.

Young Penderrin Ohmsford has been charged with the daunting task of rescuing bis aunt Grianne, Ard Rhys of the Druid order, from her forced exile in the terrifying dimension of all things damned: the Forbidding.

With the noble dwarf Tagwen and the prodigal elven princess Khyber Elessedil by his side - and with the outcome of the bloody war between the Federation and the Free-born at stake - Pen has accepted his mission without question. But not without risk... or sacrifice.

Shadea a'Ru, the ruthless Druid responsible for usurping the true Ard Rhys, has sent her agents and assassins in relentless pursuit of Pen's small band. And in securing the talisman he needs to breach the Forbidding, Pen has paid a devastating price. Now, if the last of the Free-born forces should fall, Shadea's domination of the Four Lands will be assured. Only Pen's success can turn the tide.

But Pen's challenge grows greater when he learns that his parents, Bek Ohmsford and Rue Meridien, have fallen into Shadea's hands. He must try to save them, by plunging into the depths of Druid's Keep where Shadea's minions and dark magic lurk at every turn.

Yet these dangers will all pale in comparison to the horrors that wait inside the Forbidding - horrors poised to break free upon the Four Lands when the time is right...

A reasonable read... although as per Terry Brooks it really does pay to have read all the rest of the Shannara series first. This book was easy fare - complicated story lines written so well even children could understand.
A great read for Terry Brooks fans... a bit more tricky for everyone else.
Definitely worth a try.

A galactic revolution has toppled the Starfire dynasty, and swept into power the harsh Democratic Republic. To support the murdered king is now punishable by death. But on distant worlds, the few surviving Guardians carry a dangerous secret: Somewhere in the galaxy, they shield the rightful heir to the throne.

Stalking the hidden king is the Warlord, a ruthless Republican general who wields the bloodsword. Only a few brave rebels dare to ... more...