An Island of Our Own review 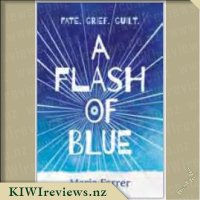 A Flash of Blue product reviews

Amber is convinced that her brother's death is her fault. It happened on the day that she had taken something of his, something precious, the very thing that gave him his luck. Weighed down with grief, guilt and pressure to be the perfect daughter, Amber turns to the one boy who can make her feel better.

But Tyler runs with the wrong crowd and Amber finds herself in big trouble: trouble that would never usually happen to a girl like her. Only with her life having crashed around her will Amber find a way to rebuild it, and to finally find out what part she really played in her brother's death.

The thing that caught my attention about this book first, was the cover art. It's got a bold circle of electric metallic blue in the mid 1/3 of the cover, that then has the same metallic lines radiating outwards around it. It is otherwise a plain blue and white cover, but something about it intrigued me. The blurb gives just enough information to really grab you. All I knew going into the book was that Amber had taken something that wasn't hers and that her brother was dead. And that there was trouble.

I started to read this book a day ago. The prose was really easy to sink into. There is a prologue so you get to understand how the situation played out beforehand, that leads into the book. Amber does something in that prologue, which as the reader, I didn't think would have lead to her brother's death. But for Amber, she carries that guilt and blame with her into the first chapters of the book. As the story unfolds a year after the events in the prologue, you can see the damage of her guilt. But also the guilt and grief that each character is carrying around.

Liam had a secret, which I twigged to quite early on. But it is the grief that tears the characters apart. It is often like a train wreck, where you want to put it down but you can't. I did put it down the first night and found myself waking often wandering what would happen next! The trouble Amber gets herself into is pretty intense and there are many times I wanted to scream at her to tell someone what was happening. But the other characters also weren't helping in the way they were dealing or not dealing with things.

Although some awful stuff happens, it is not too graphic. There are hints at things that could have been much worse if they had proceeded. For this reason I think it would be a fine book for pre-teen or teenagers to read. This book is ultimately about relationships and how grief can change them for the good and for the bad. But there is also a bit of a lesson in being community minded as well, and about second chances as well. Life goes on. I would definitely recommend this book.