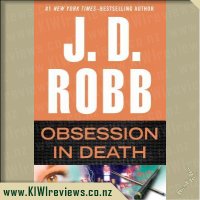 Eve Dallas has solved a lot of high-profile murders for the NYPSD and gotten a lot of media. She - with her billionaire husband - is getting accustomed to being an object of attention, of gossip, of speculation.
But now Eve has become the object of one person's obsession. Someone who finds her extraordinary, and thinks about her every hour of every day. Who believes the two of them have a special relationship. Who would kill for her again and again. An aggressive defense attorney who's sparred with Eve in the courtroom is the first victim, but she isn't the last. The messages left for Eve at the crime scenes chill her and turn her stomach. It doesn't get much more personal than this - and Eve refuses to hand the investigation over to anyone else. With a murderer reading meaning into her every move, handling this case will be a delicate - and dangerous - psychological dance.

And Eve knows that underneath the worship and admiration, a terrible threat lies in wait. Because the beautiful lieutenant is not at all grateful for these bloody offerings from her "true and loyal friend." And in time, idols always fall....

Yet another long wait to read the latest in the long line of 'In Death' books, if you don't count the novellas then this is number 40 in the series so far, so I was expecting something that was good and a little better than the last couple in the series.

The formula for this story is not something that is new, not the basic story anyway. Murder happens, as it must for this series, and Eve is called on scene. It is there that she reads an ominous note written on the wall telling her that this murder was done on her behalf, and so begins the balancing act, can Eve fulfill her job whilst keeping the killer from getting more volatile and keep those she cares for safe? So, a crazed fan, ain't nothing new but it was written well enough that I did enjoy it and I had finished it within a day.

There isn't much going on in the way of character development though a lot of lamenting from Eve that she has somehow managed to gain more friends than she ever really wanted, but also does help her to see just how much these people mean to her and how she couldn't do without them in her life. There are a couple of sweet moments and of course a couple of harrowing moments, as one must with a deluded fan in the picture. I had to laugh a few times at Eve's reactions to the fan mail she got (which she has managed to ignore until now), so there is a good mix of all emotions in this book.

This has renewed my enjoyment for the series a bit, I enjoyed it and liked that it wasn't until closer to the end that we found out who the killer was and I am looking forward to the next in the series. Bring on #41.

Shadow is up to something with the water supply but what could it possibly have to do with the filming of a new action movie?

Special Agent EJ12 needs to keep her eye on the big picture. She needs to infiltrate the movie set and stop Shadow before it is too late. That's the easy part. As EJ12, Emma Jacks can do anything.

So why is she getting worked up over little things? Perhaps she isn't, after all.