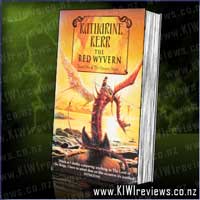 Price:
?
Available:
In all good bookstores

A new chapter of the history of the kingdom of Deverry - an ideal starting point for newcomers to Katharine Kerr's gorgeous epic; and a satisfying continuation of the saga for those readers who have followed the series through its previous incarnations.

In Cengarn, Rhodry of the silver daggers - half-elven, half-human - is beset by strange dreams. A dark-haired enchantress, the Raven Woman, is haunting his sleep, and he can find no release, even in the arms of Dallandra, his lover.

Little does he know that his feud with the Raven Woman goes back over three hundred years, to a time when the throne of Deverry stood under threat of civil war. In those days, the young king's cousin, Lilli, was forced by her scheming mother to scry for omens, and she saw terrible visions: great red wyverns sweeping down from the mountains to plunge like hawkes upon a herd of feeding swine...

The fancies of an idle mind? Or omens foretelling bloodshed and disaster for the clan of the Boar?

In my teens, I remember reading and rereading the previous books in Kerr's Deverry Cycle, and had never gotten round to reading any from the Dragon Mage series. So it was with great enthusiasm that I dived into the first Katharine Kerr book I've read in years, with high expectations after having loved every one of her books I'd read previously. I was not to be disappointed!!! Kerr once again has written a fast-paced, enthralling novel that keeps its grip on you from the first page til the very last... and even then, as the book closed on the final page, I was already reaching for book #2 in this wonderful new section of the Deverry Cycle -"The Black Raven".
"The Red Wyvern" brought me back in touch with characters I hadn't read about in years, but still remembered as clear as though I'd only just recently finished her other books, instead of years ago. From the crazy, yet loveable Beserker - Rhodry, to the talented Bard Maddyn, and of course dear old "no-one"...a.k.a Nevyn, Dweomer Master who pops up here there and everywhere... it's rather hard to forget these characters, and has me extremely glad there are already 6 books in the Dragon Mage series alone, so it'll be a while before I've finished with Deverry! In a way, Kerr is very much like another of my favourite authors - Jennifer Fallon - in that every book she writes (without fail) is thoroughly enjoyable, and, unlike many authors who, by the time you've reached book #3 in their series, you're glad it's over, is an author who knows how to keep a series interesting, no matter how many books are in it!!
if you've read any of Katharine Kerr's books before, or enjoy the fantasy genre, then this is definitely one I urge you to give a go. You won't be disappointed!!

1722: A second Dark Age looms after the devastating impact of an asteroid, unnaturally drawn to Earth by dire creatures who plot against the world of men. Sir Isaac Newton and his young apprentice. Benjamin Franklin, have taken refuge in ancient Prague, seeking the secrets of aetheric beings whose vast powers and new sciences have so nearly destroyed humanity ... yet who may prove to be its last, great hope.